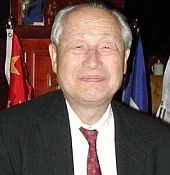 At the 2002 PICES Annual Meeting in Qingdao, PR China, it was announced that Dr. Yutaka Nagata (University of Tokyo, Japan) was the recipient of the second annual Wooster Award.

The presentation ceremony took place on October 21, 2002, during the PICES-2002 Opening Session. The Science Board citation was presented by Dr. Ian Perry, Science Board Chairman, and included in the 2002 Annual Report (www.pices.int/publications/annual_reports/). A commemorative plaque was given to Dr. Nagata by Dr. Hyung-Tack Huh, PICES Chairman. Dr. Perry also read the tribute sent by Dr. Wooster.

Two nominations were received for the 2002 PICES Wooster Award. The unanimous choice by the Science Board is Dr. Yutaka Nagata of Japan.

The Wooster Award is to be given annually to an individual who:

- has made significant contributions to North Pacific marine science;

- has achieved sustained excellence in research, teaching, administration or a combination of these in the area of North Pacific;

- has worked to integrate the various disciplines of the marine sciences; and

- preferably someone who is, or has been, actively involved in PICES activities.

Dr. Nagata exemplifies all of these criteria. He has demonstrated sustained excellence in science, teaching and administration of marine science in the North Pacific region.

After retiring from being a Professor at two Japanese Universities, he established for himself a “second career” as a manager of oceanographic data, products, and their quality control (he is the first Director of the Marine Information Research Center in Japan). He has over 70 publications in English, with further publications in Japanese, including 10 books. He has served a leadership role in oceanography in Japan, and on several international oceanographic committees in addition to those of PICES. Dr. Nagata has a broad inter-disciplinary range, with publications from core physical oceanography to lobster biology. He has been a central figure in the successful establishment of PICES, including serving as the first Chairman of the Physical Oceanography and Climate Committee, Co-Chairman of the Climate Change and Carrying Capacity Program, and member of Working Group 1 on Okhotsk Sea, along with an important role in the formation of the Technical Committee on Data Exchange. Science Board is very pleased to name him as the recipient of the PICES Wooster Award for 2002.

“In PICES, we have emphasized international and interdisciplinary approaches to marine science, and as the Science Board citation makes clear, all of these have characterized Professor Nagata’s professional life. There is another, interpersonal, dimension that is vital for the success of any collaborative effort, and the friendships that have developed within the PICES family have accounted for much of its effectiveness. The day will come when winners of this award will not have been personal friends of mine, but I am happy that this is not the case with this year’s winner. My friendship with Yutaka Nagata goes back to our first encounter, in the late 1960’s when he came to La Jolla for a stay at Scripps. As described in Bruce Taft’s encomium in PICES Press, it was then and is now, Yutaka’s warm personality, sense of humor, and frankness that make friendship with him so rewarding. Even though absent from this occasion, I send from afar my sincerest congratulations to Nagata-san whom we all recognize as one of the jewels in the PICES crown.”