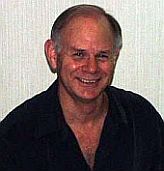 At the 2005 PICES Annual Meeting in Vladivostok, Russia, it was announced that the late Dr. Daniel Ware (Fisheries and Oceans Canada) was the recipient of the fifth annual Wooster Award.

The presentation ceremony took place on October 13, 2005, during the PICES-2005 Opening Session. The Science Board citation was presented by Dr. Kuh Kim, Science Board Chairman, and included in the 2005 Annual Report (www.pices.int/publications/annual_reports/). Sadly, Dr. Ware passed away in late July of this year, but his wife, Madeleine, was able to join the ceremony for this celebration of Dr. Ware's accomplishments. A commemorative plaque was given to Madeleine by Dr. Vera Alexander, PICES Chairman, who also read the tribute sent by Dr. Wooster.

In April of this year, the Science Board evaluated the nominations and selected Dr. Daniel Ware as the recipient of the Wooster Award in 2005.

Dr. Ware began his scientific career in 1967 at the University of British Columbia where his doctoral research was part of a multidisciplinary study of food web structure and dynamics in a lake ecosystem. A move to the Atlantic coast for a decade at the Marine Ecology Laboratory allowed Dr. Ware to conduct theoretical and field research on fish bioenergetics, fisheries oceanography, stock-recruitment theory, and early life history biology of cod, mackerel, and herring. He returned to the Pacific Coast as a scientist at the Pacific Biological Station and served for a period as Head of the herring research section. He collaborated with Japanese scientists in a comparative study of the Oyashio and British Columbia marine ecosystems. Dr. Ware was Adjunct Professor at both the Simon Fraser University and the University of British Columbia. Following his retirement from Fisheries and Oceans Canada in 2000, he was the President of Aquatic Ecosystem Associates, and Chairman of the Science Panel of the Herring Conservation and Research Society.

Dr. Ware is unique among the recipients of this award in that his career was spent in government rather than academia. He tackled both theoretical topics in marine ecosystem science as well as scientific problems associated with the management of fisheries. During the course of his career, he either wrote or contributed to over 50 articles in the primary scientific literature. The most recent of these appeared this year in the prestigious journal, Science. Coauthored with Dr. Richard Thomson of Fisheries and Oceans Canada, the paper demonstrated a strong bottom-up level link between primary productivity and resident commercial fish yield for the entire west coast of North America, extending from the California Bight to the western Aleutian Islands. As an example of the breadth of his scientific interests, his first paper in Nature in 1974, coincidently with the former PICES MEQ Committee Chairman, Dr. Richard Addison, was on contaminants in plankton.

Dr. Ware is also unique in being the first person to hold the position that I now occupy, Chairman of Science Board. He led the Organization through its formative years and was a leading force in the establishment of the PICES/GLOBEC Climate Change and Carrying Capacity Program, or the CCCC Program. After serving his 3-year term at the helm, he continued with the CCCC/MODEL Task Team during the development of the now well-known ecosystem model, NEMURO. He was particularly interested in the role of microbial processes. A special issue of Ecological Modelling to be published in 2006 will be the first major publication on NEMURO and NEMURO.FISH models, and this issue will be dedicated to Dan.

In June of this year, Dr. Ware received the Timothy R. Parsons Ocean Science Award from Fisheries and Oceans Canada. It is given to residents of Canada for distinguished accomplishments in multidisciplinary facets of ocean sciences either during their lifetime or for a recent outstanding achievement. Dan was the first recipient of this Award after Dr. Parsons.

To a taxonomist, the word "holotype" designates the single specimen used as the basis for the original description of a species. In re-reading the criteria for the Wooster Award, I realized that Dan Ware must have been its holotype. His research was certainly inter-disciplinary as it focused on important aspects of ecosystem response to human and climate interactions. This was a central theme of PICES from the beginning and one that he significantly advanced as first Chairman of the PICES Science Board and then as active participant in its working groups. Both his scientific contributions and his sustained efforts on behalf of our organization clearly qualify him to receive the award. He was a valued friend and colleague, and one who will be greatly missed.

In Daniel's name, I would like to thank you all for this award. I do remember how pleased and honoured Dan was when he heard about the nomination. He was truly looking forward to travelling to Vladivostok and to reconnect with his colleagues and friends. PICES, or rather the people connected and involved with it, were close to his heart.

Dan was passionate about his research, and he believed strongly that solid marine ecological research was paramount to manage fish stocks responsibly. He saw his duty as being twofold: firstly, to guarantee the survival of the resource, and secondly, to guarantee the survival of the fishing industry. Dan wrote his personal "Code of Ethics" that always guided his approach to research as well as the interpretation of the data. Here are his words:

- Always err on the side of the Resource;

-Always tell the client the "truth", whether he/she wants to hear it or not;

-Work co-operatively with all clients to come up with the best advice.

Dan was passionate about his work, and he felt fortunate that his work connected him with so many dedicated and talented people, many of whom became close personal friends. I know he would have acknowledged you all by name and thanked you for your support and the myriad ways in which your vision influenced his research.

I would like to close by quoting Dan when he accepted the Timothy Parsons award in Vancouver this spring "I want to thank you all for this award. It is an honour to be acknowledged by your colleagues and peers".