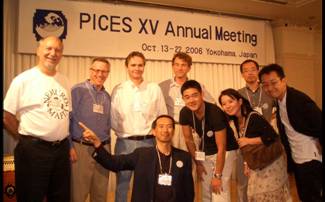 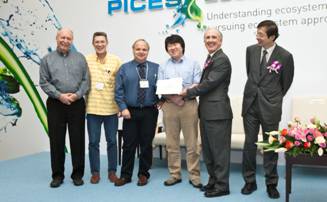 At the 2011 PICES Annual Meeting in Khabarovsk, Russia, it was announced that Dr. Bernard Megrey (NMFS, NOAA, Alaska Fisheries Science Center, U.S.A.) was the recipient of the 11th annual Wooster Award.

The presentation ceremony took place on October 17, 2011, during the PICES-2011 Opening Session. It was conducted by Drs. Lev Bocharov (PICES Chairman) and Sinjae Yoo (PICES Science Board Chairman). Sadly, Dr. Megrey passed away in 2010, but his wife and children were able to join the ceremony for this celebration of Dr. Megrey's accomplishments. Dr. Yoo introduced the award and read the following Science Board citation.

It is with both great sadness and pleasure I announce that the late Dr. Bernard Megrey is the recipient of the 2011 Wooster Award.

As many of you know, Bern passed away suddenly at the age of 60, almost one year ago (October 1, 2010). The Wooster Award is given annually to an individual who has made significant scientific contributions to North Pacific marine science. In particular, the Award recognizes sustained excellence in research, teaching, administration or a combination of the three in the area of North Pacific marine science. Special consideration is given to individuals who have worked to integrate knowledge from the disparate disciplines of marine science.

Bern was born in July 1950, in Latrobe, Pennsylvania. Along his educational pathway, he earned an Associate of Science degree (1971) and a Bachelor of Arts degree from Cleveland State University in Ohio (1974). Bern began his scientific career in 1978, with a Masters in Environmental Science from Miami University in Ohio, and carried out his doctoral research at the University of Washington.

Bern also worked tirelessly for several professional organizations, most notably the American Fisheries Society (AFS), International Council for the Exploration of the Sea (ICES), Global Ocean Ecosystem Dynamics (GLOBEC) and Ecosystem Studies of Sub-Arctic Seas (ESSAS) projects, and PICES. Held in the highest regard by his colleagues, he never missed a chance to collaborate, share research, or help others break into or advance their careers in fisheries science. During the course of his career, Bern either wrote or contributed to over 80 articles in primary scientific literature

In PICES, Bern chaired the Technical Committee on Data Exchange (TCODE) and co-led the MODEL Task Team under the Climate Change and Carrying Capacity (CCCC) Program. The greatest achievement of this Task Team was the development of the NEMURO (North Pacific Ecosystem Model for Understanding Regional Oceanography) model. Bern made significant contributions to North Pacific marine science, including understanding of how fluctuations in climate may impact marine ecosystem production.

Bern was highly regarded regionally, nationally and internationally in the field of marine fishery science professionals. His wife Ronnette and daughter Sarah are here today to accept the award, and we welcome them to the Russian Federation, to Khabarovsk, to PICES, and to this meeting where we can honor Bern’s memory.

Our children, Sarah, Nick and Chris, and I would like to thank PICES for honoring Bern with this posthumous award. It is with great appreciation and gratitude that Bern’s many friends and colleagues keep his memory alive and honor the work that he performed over his 30+ year career. We are so very happy, and Bern would be touched, that several early career scientists were able to travel to Khabarovsk for this meeting using the Dr. Bernard A. Megrey Fund established by Dr. Megrey’s family and friends, to support participation of graduate students and early career scientists in PICES Annual Meetings and conferences co-sponsored by the Organization.