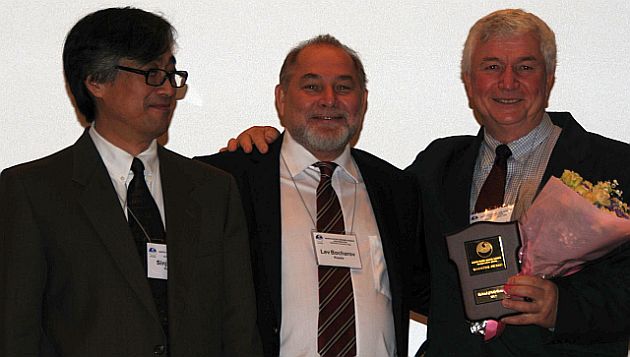 At the 2012 PICES Annual Meeting in Hiroshima, Japan, it was announced that Dr. Richard Beamish (Pacific Biological Station, Fisheries and Oceans Canada) was the recipient of the 12th annual Wooster Award.

The presentation ceremony took place on October 15, 2012, during the PICES-2012 Opening Session. It was conducted by Drs. Lev Bocharov (PICES Chairman) and Sinjae Yoo (PICES Science Board Chairman). Dr. Yoo introduced the award and read the following Science Board citation.

The Wooster Award is given annually to an individual who has made significant scientific contributions to North Pacific marine science. In particular, the Award recognizes sustained excellence in research, teaching, administration or a combination of the three in the area of North Pacific marine science. It is my great pleasure to announce that Dr. Richard Beamish is the recipient of the 2012 Wooster Award.

Dick was born and raised in Ontario, a region of Canada well known for its large number of lakes. Accordingly, he decided after his undergraduate degree in Biology, to undertake graduate studies in freshwater research at the University of Toronto. Dick started his career with the Department of Fisheries and Oceans in Winnipeg, where he studied the impacts of airborne pollution on fishes, before moving to the Pacific Biological Station in Nanaimo, British Columbia, to work in the Groundfish Section. There, he recognized the importance of accurate fish age estimates and set up an Ageing Lab at the Station. With his own research, he discovered that fish were much older than previously thought, and revolutionized the age determination methods of fish, resulting in a complete rethinking of stock assessment and management.

In the 1990s, Dick decided to tackle research on Pacific salmon. He was the first to provide evidence of the synchrony between Pacific salmon production and climate, specifically atmospheric processes. In addition, he was one of the first scientists to write about North Pacific climate regimes and regime shifts. Recognizing a lifetime of outstanding achievement, dedication to the community and service to the nation, the Canadian Government awarded him with the prestigious Order of Canada in 1999, for his discovery of the effects of acid rain on fishes in Ontario lakes, his contributions to the age determination of fishes, and to the understanding of climate impacts on fishes.

Along with receiving other numerous national and provincial awards, Dick has also been recognized internationally, such as by the American Fisheries Society for the sustained excellence in marine fisheries biology, by the International Panel on Climate Change for his significant contributions that helped the Panel receive the Nobel Peace Prize for 2007, and by the Sea Fisheries Institute in Gdynia, Poland, for outstanding scientific achievements.

In 1985, he was the President of IRIS, an organziation that provided focus for international recruitment studies in the subarctic Pacific. In this capacity, he was instrumental in the formative meetings leading to the development of the North Pacific Marine Science Organization (PICES). In fact, the first formal PICES Annual Meeting (Victoria, B.C., 1992) was held in conjunction with the international symposium on “Climate Change and Northern Fish Populations” which was organized by Dick. All of us in the PICES community are aware of Dick’s involvement with PICES. Dick has also brought enthusiasm and mentoring to academia. From 1996 until 2011, Dick was an Affiliate Professor at Vancouver Island University in Nanaimo. For recognition of his contribution to teaching and fundraising, and for his achievements in science, he was awarded an Honorary Doctorate of Science degree from Vancouver Island University in 2009.

Dick retired in 2011 but continues research on lampreys and the factors affecting Pacific salmon production, and is currently editing a book on all aspects of the Strait of Georgia. He has had a career as a leader in marine research, with innovative approaches to ecosystem science, age determination, taxonomy, and climate change impacts on marine resources. He has published over 200 peer-reviewed journal publications, with senior authorship on 123 of these. From his publication list, there are 7 that are considered to be fisheries science ‘citation classics’. It is no wonder that even in retirement he is still travelling the globe, giving keynote addresses, providing advice and winning awards.

I very much appreciate receiving the Wooster Award from PICES because it is recognition from my colleagues and it is named after a person that I worked closely with for many years. I think that Warren Wooster first talked to me in the late 1970s about the need to relate fish population dynamics to climate and ocean conditions. This was a time when many in fisheries science considered that climate and the ocean effects on fish would be mostly random. For example, it was believed that fishing and freshwater habitat were the most important factors regulating the abundance of Pacific salmon. Warren had a friendly and unrelenting way of recruiting people into his way of thinking. This was not a problem for me as I found it refreshing that there was someone else who believed that trends in climate and the ocean strongly affected fish abundance. Together we ran an organization called IRIS, which was a “Woosterism” for “International Recruitment Studies in the Subarctic.” IRIS was formed to demonstrate to Canada and the United States that a PICES-type of organization was an efficient way of improving the understanding of the mechanisms that regulated fish abundance. Warren Wooster was not as enthusiastic about fish as I was, but this never got in the way of our vision of PICES. Once PICES was formed, we continued to work together as he assigned me and colleagues to the various groups and tasks.

If Warren Wooster was still with us, I would try to talk him into supporting an “International Year of the Salmon.” A few days ago, I was at the North Pacific Anadromous Fish Commission meeting in St. Petersburg, Russia, and presented a paper on the value of forming an integrated group of researchers to determine how Pacific salmon populations are regulated, and to develop models that will use climate and ocean parameters to forecast production trends of the various species of salmon. I think we are close to being able to do this if we can get the support to build teams of researchers. I suggested that participants in PICES would be essential to the success of the effort. I have the feeling that Warren Wooster would even be pleased with this idea.

I always tell people that there is very little that I do all by myself. There is a list of collaborators and people that influence what I do that is much too long to report. So let me simply say, “Colleagues, thank you for your help and thank you for all the years of fascinating science that I have enjoyed at PICES.