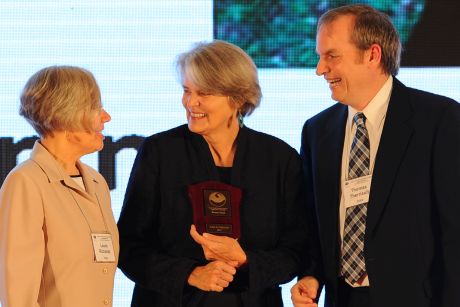 At the 2015 PICES Annual Meeting in Qingdao, China, it was announced that Dr. Anne B. Hollowed (National Marine Fisheries Service, NOAA, USA) was the recipient of the 15th annual Wooster Award.

The presentation ceremony took place on October 19, 2015, during the PICES-2015 Opening Session. It was conducted by Drs. Laura Richards (PICES Chairman) and Thomas Therriault (PICES Science Board Chairman). Dr. Therriault introduced the award and read the following Science Board citation.

In 2000, PICES Governing Council approved the establishment of an award named in honour of Professor Warren S. Wooster, a principal founder and the first Chairman of PICES, and a world-renowned researcher and statesman in the area of climate variability and fisheries production. The criteria for selection are sustained excellence in research, teaching, administration or a combination of the three in the area of North Pacific marine science. Special consideration is given to individuals who have worked in integrating the disciplines of marine science and preference is given to individuals who were or are currently actively involved in PICES activities.

Please join me in congratulating the recipient of the 2015 Wooster Award, Dr. Anne Babcock Hollowed, a Senior Scientist with NOAA’s National Marine Fisheries at the Alaska Fisheries Science Center in Seattle, for her sustained excellence in research, integrated across marine science disciplines, much of which has been in association with PICES. In her 33-year research career, she has published more than 75 peer-reviewed publications and demonstrated extraordinary leadership at regional, national and international levels related to the impact of climate change on marine ecosystems.

Anne was brought up in Minnesota. For those of you unfamiliar with the geography of the United States, the important thing to know is that this is roughly equidistant from the Atlantic, Pacific and Arctic Oceans that touch the United States (or pretty much as far away as one can get from any ocean) – an appropriate birthplace for a preeminent marine scientist.

As a teenager, Anne stood out among her peers as uniquely skilled at mechanics. While the other girls were learning to cook and master domestic challenges, Anne repaired bicycles.  Lots of them…..First for her family, then for the neighbors’ kids, and pretty soon, she had a cottage industry going, with bicycles coming in from all around the Lowry Hill neighborhood.

The kids would be called in for dinner, and there Anne would sit on the curb, working away trying to solve a mechanical puzzle and get the machine working properly again. She’s always loved solving complex problems, staying focused until she discovers the solution.

Her PhD studies at the University of Washington were under the tutelage and mentorship of Dr. Warren Wooster.

Anne’s scientific career started out with the assessment of groundfish stocks in the North Pacific and Bering Sea, but this quickly expanded to include impacts of fishing and climate change on marine ecosystems. She played a leadership role in the development and execution of the PICES/GLOBEC Climate Change and Carrying Capacity Program (the 4 C’s Program), the ICES/PICES Section on Climate Change Effects on Marine Ecosystems and the PICES FUTURE program, all in addition to her contributions to several important national research programs. She has taken her passion and commitment to the global level and served as a Lead Author for the Intergovernmental Panel on Climate Change (IPCC) Working Group II, writing the impact assessment of climate change for the Polar Regions. Anne’s contributions go beyond the publication of research results. She has played a key role in the design and implementation of large research programs in the US. This includes the very difficult task of convincing higher authorities that these programs are worthy of funding and support.

There are many scientists who have benefited from her efforts and in the final analysis; the agencies that supported these programs have been rewarded. Anne’s CV includes an impressive array of awards and recognition from NOAA, the Department of Commerce, ICES and others but there are a couple of recent awards that I think are great illustrations of Anne’s contributions.  In 2013, Anne received a NOAA Fisheries Employee of the Year Award in the Supervisor Category and in 2014 she was presented the NOAA Administrator’s Award for her contributions to the 5th IPCC Assessment Report.  It is impressive that she could manage such an individual scientific contribution while still attending to (at the highest levels of achievement) the research group that she leads up.

Family is also a really important part of Anne’s life and the years of tending to a young family (three children – John Jr., Thomas and Madolyn) when both partners are engaged in full-time careers is not without its challenges. Apparently, there was a day when Anne and her husband John sent daughter Madolyn off to school when she was feeling a little ill.  The story goes that husband John dosed Madolyn with medicine to make her feel better but as it turned out the dose might have been a little too strong, and Madolyn fell asleep at school.  The teachers were concerned and one of them quickly found Madolyn’s brother and asked him to call his mother, Doctor Hollowed – she'd know what to do!  He laughed and said “Sorry, she’s not that kind of a doctor, she’s a Fish Doctor!”  Anne’s three children are pursuing education and careers in medicine – not one interdisciplinary marine scientist in the lot!

Please join me in congratulating Dr. Anne Babcock Hollowed as the recipient of the 2015 Wooster Award.

I wish Warren was here.  I've watched individuals receive this award and am so honored to be among those that have gone before me.  I just can’t thank you enough.  I'm just stunned – really, I’m just speechless.  All of you know how much each one of you means to me, both as colleagues in our scientific efforts, but as well our pursuit in becoming friends across multiple nations.  Keep at it.  Thank you so much.  I am so honored.