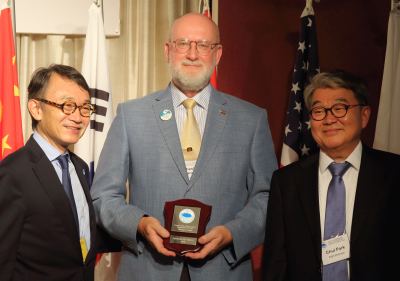 At the 2018 PICES Annual Meeting in Yokohama, Japan, it was announced that Dr. Vyacheslav (Slava) B. Lobanov (V.I.Il’ichev Pacific Oceanological Institute, FEB RAS, Russia) was the recipient of the 18th annual Wooster Award.

The presentation ceremony took place on October 28, 2018, during the Opening Session at PICES-2018 and was conducted by Drs. Chul Park (PICES Chair) and Hiroaki Saito (PICES Science Board Chair). Dr. Saito introduced the award and read the following citation.

In 2000, PICES Governing Council approved the establishment of an award named in honour of Professor Warren S. Wooster, a principal founder and the first Chairman of PICES, and a world-renowned researcher and statesman in the area of climate variability and fisheries production. The criteria for selection are: sustained excellence in research, teaching, administration or a combination of the three in the area of North Pacific marine science. Special consideration is given to individuals who have worked in integrating the disciplines of marine science, and preference is given to individuals who were or are currently actively involved in PICES activities. Please join me in congratulating the recipient of the 2017 Wooster Award, Dr. Vyacheslav (Slava) B. Lobanov.

Dr. Slava Lobanov is the Director of the V.I.Il’ichev Pacific Oceanological Institute (POI), Far Eastern Branch, Russian Academy of Sciences, the leading Russian marine institute for Pacific studies. Slava is a world-renowned oceanographer who has spent a productive career advancing our understanding of North Pacific oceanography and promoting international collaboration in marine science. He has long been a leader in PICES, serving as Chair of POC—the first Russian Chair of a committee. He also is a Co-Chair of AP-CREAMS, a member of the FUTURE Scientific Steering Committee, a Member of the MONITOR Committee and a member on several Working Groups. Throughout his 40-year career, Slava has exemplified high standards of scholarship, mentorship of young scientists, and promotion of international collaboration in the marine sciences. We are very pleased to honor Dr. Lobanov with the Wooster Award.

Dr. Slava Lobanov was born in Leningrad, USSR (now St. Petersburg). He has one sibling—a younger sister. As we see [referring to slide], Slava had a very loving family, who dressed him appropriately for the Russian weather—shorts for triking with mom, and heavier clothing for skiing with dad. Slava had a happy childhood growing up in Leningrad in the 1950s and 1960s. And he developed an interest in the sea – and the things that lived in it – from an early age. Here [referring to slide], a young Slava is conducting ecosystem research on the banks of the Volga River. But Slava had other interests as well. As a young man, Slava dreamed of being a rock musician. And he is still making music. Here [referring to slide], Slava is singing in the Russian Chorus at the PICES Annual Meeting in Hakodate.

In 1980, Slava met the love of his life, Alica, and married her in 1981. Alica is the artistic one in the family, working as an architect and designer. Slava has been known to consult Alica on his oceanographic figures for his presentations. In 1982, two became three when their lovely daughter Polina was born. Slava is a loving husband to Alica and father to Polina ... And is now also a very proud grandfather to little Miloslava.

Slava’s love of the ocean led him to the Department of Oceanography at Leningrad State University, where he graduated in 1977. The late 70s was an exciting time to be in oceanography, as it was an era of large-scale field experiments like POLYMODE and POLYGON, and Slava spent many days in the stormy Greenland Sea.

Following his studies, Slava underwent a long migration, all the way out to the new Pacific Oceanological Institute in the Far East, where he was hired as a Junior Researcher. He has remained at POI in Vladivostok ever since, earning a PhD in Oceanography in 1993, and remaining very active in both Russian and international oceanographic expeditions. It was during these years that Slava developed a strong interest, and expertise, in mesoscale features such as Kuroshio warm-core rings and the large anticyclonic eddies around the Kuril Islands, in the water exchange between the Okhotsk Sea and the Pacific, in water mass transformations, and in the dynamics of the East Asian Marginal Seas.

Slava established himself as a premier sea-going oceanographer. He spent many days at sea ... on ships from many nations, with long cruises to exotic seas from Kamchatka to Australia, and from California to the Mediterranean. Although he seems to be a little over-dressed for this cruise! [referring to the presentation slide]

Slava has had a storied career at POI. He worked his way up from Junior Researcher to Researcher to Senior Researcher, and was named Deputy Director in 1995. Since 2015, Slava has been the Director of the POI, the leading oceanographic institute in the Russian Pacific. Some of his more highly cited papers published in English are shown here, and reflect the collaborations he has developed with Russian, Korean, and U.S. scientists to study the oceanography of the East Asian Seas.

Slava's stature as a leading oceanographer is reflected in the many leadership roles he has played, and continues to play, in the international oceanographic community. In addition to his leadership roles in PICES, he is Chairman and National Coordinator of the IOC/WESTPAC Coordinating Committee for NEAR-GOOS, has been on the Board of Directors and is currently President-Elect of the Pacific Congress on Marine Science and Technology, and is on the Steering Committee of the Program of East Asian Seas Collaborative Experiments. He has contributed to many expert groups in PICES.

Dr. Lobanov has shared his expertise as a teacher and mentor to young scientists throughout the Pacific Rim. Here he lectures at the Remote Sensing Course held in Vladivostok in 2011. Slava has a faculty appointment at the Far Eastern Federal University, where he advises students and organizes the 'Pacific Floating University' course to give students at-sea experiences. Two of Slava’s students have been awarded Best Presentation awards at PICES Annual Meetings.

Slava has been an active member of PICES since 1993. The next few slides show photos of Dr. Lobanov at several PICES events. Clearly, he is someone who is regularly sought out for scientific discussions, or just to enjoy a drink. This abstract art is a portrait of Slava created by Prof. Yutaka Nagata. [referring to slides]

For all of his scientific accomplishments, Slava has remained a fun-loving and easy-going friend and colleague. Please join me once again in congratulating Dr. Slava Lobanov as the recipient of the PICES 2018 Warren S. Wooster Award.

I would like to thank PICES for this very important award. I am especially glad to receive it here in Japan, the country where I met PICES for the first time 25 years ago. These two and a half decades are a long and important part of my life. I learned much by being involved in PICES activities. I have always felt strong support from PICES people. We are like a big family. I have enjoyed this time very much.

International collaboration is essential for the progress of oceanography. The ocean has no borders. Since the time of perestroika in Russia I have been supporting various international programs and organizations to make my country an active part of global oceanographic community. This is mutually beneficial.

Prof. Warren Wooster made an outstanding contribution to the development of international marine science by leading IOC-UNESCO, SCOR, ICES and establishing PICES. These organizations created a spirit of trust and understanding between people of different nations even though they speak different languages. This has resulted in a good collaboration and friendship among them.

It is a great honor for me to receive the Wooster Award. I would like to thank PICES, all my friends there, my Russian colleagues and my family for the tremendous support over all these years.