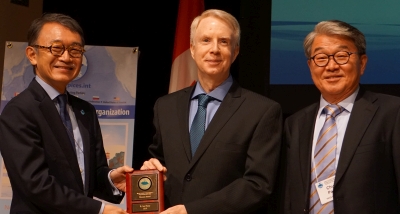 At the 2019 PICES Annual Meeting in Victoria, Canada, it was announced that Dr. R. Ian Perry (Pacific Biological Station, Canada) was the recipient of the 19th Wooster Award.

The presentation ceremony took place on October 21, 2019, during the Opening Session at PICES-2019 and was conducted by Drs. Chul Park (PICES Chair) and Hiroaki Saito (PICES Science Board Chair). Dr. Saito introduced the Wooster Award and read the following citation.

In 2000, PICES Governing Council approved an award named in honour of Professor Warren S. Wooster, a principal founder and the first Chairman of PICES, and a world-renowned researcher and statesman in the area of climate variability and fisheries production. The criteria for selection are sustained excellence in research, teaching, administration or a combination of the three in the area of North Pacific marine science. Special consideration is given to individuals who have worked in integrating the disciplines of marine science, and preference is given to individuals who were or are currently actively involved in PICES activities. Please join me in congratulating the recipient of the 2019 Wooster Award, Dr. Ian Perry.

Dr. Ian Perry is the Head of the Plankton and Fisheries Oceanography Program of the Pacific Branch of the Department of Fisheries and Oceans. Ian is a world-renowned scientist who has spent a productive career advancing our understanding of North Pacific oceanography, and the impact of climate on fish distributions and recruitment. He has long been a leader in PICES, serving as Chair of Science Board and as Chair of the first PICES NPESR working group. He also served as an executive committee member of the PICES-GLOBEC Implementation panel and contributed to the science plan of the PICES-GLOBEC International Program on Climate Change and Carrying Capacity. He has been a contributing or lead author to multiple PICES Scientific Reports, including a recent one coedited with Dr. Mitsutaku Makino on Marine Ecosystems and Human Well-being: The PICES-Japan MAFF MarWeb Project.

Throughout his career, Ian has exemplified high standards of scholarship, mentorship of younger scientists, and promotion of international collaboration in the marine sciences. PICES is very pleased to honor Dr. Perry with the Wooster Award.

Ian Perry was born in Vancouver, Canada, and is the oldest of brothers Keith and Greg brothers (whom I believe are in this room). It is rumoured that Ian thoroughly explored his crib in the left photo [slide 4], and may have been speeding a few times with his first set of wheels. an in his teens and early adulthood was an adventurer. He was an avid backpacker and loved sailing. In high school, Ian was a member of flying sharks swim club and demonstrated swim safety for the Canadian life saving society. As an undergraduate at the University of British Columbia, Ian backpacked Europe, and a few years later, he enjoyed cycling (this time on two wheels) the beautiful coastline of southern British Columbia.

Ian met his wife, Ingrid, in Vancouver and married her in 1986. Later they produced a daughter, Jennifer. A true family man, Ian enjoyed activities with them, especially outdoor activities, as shown here in the photos of the family canoeing in Canada and enjoying a Venice canal excursion not requiring that they provide the propulsion. Here is a photo of Ian with Jennifer [slide 8] looking for the right pumpkin. We don’t know if the desired pumpkin was found. Ian has traveled extensively – sometimes with family, who particularly like Europe, Japan and Hawaii and many times as an invited participant or contributor to working groups in really nice places. In this slide [slide 9] are shown various photos of Ian while traveling in Japan, probably without family, or perhaps with a family member taking the photo. Ian has visited Hawaii many times for PICES meetings/conferences, and seems to enjoy, in particular, opportunities to get in the warm water, and snorkeling. Yes, Ian occasionally went on research cruises like this one shown…..Ooops, not this kind of research cruise… [slide 11] this kind of research cruise…sampling plankton off Vancouver Island [slide 12].

Growing up in Vancouver, Ian did his schooling there. After graduating from Lord Byng High School he attended the University of British Columbia, where he obtained a Bachelor of Science, with honours, in 1977, and a PhD in Zoology in 1984.

Prior to obtaining his current position as Head of the Plankton and Fisheries Oceanography Program at Fisheries and Oceans Canada, he spent time as a research scientist working on shellfish fisheries, at Saint Andrews Biological Station in New Brunswick, on the Atlantic coast. After returning to the West Coast of Canada, Ian also took an adjunct professor position at the Fisheries Center of the University of British Columbia, and has since taught courses on fisheries oceanography in several countries world-wide.

Ian’s contributions to PICES are many and diverse—so much so that to illustrate his productivity requires three slides. This and the next slide illustrate some of his accomplishments for PICES. These span being a member of Working Groups…to being a co-chair of specific working groups and author or co-editor of at least 11 reports in the PICES Scientific Report Series, including the PICES- Marine Ecosystem Health and Human Well-Being project funded by the Ministry of Agriculture, Forestry and Fisheries of Japan.

Ian was an Executive Committee member of the PICES Climate Change and Carrying Capacity (or 4 Cs) program from its inception in 1995 until 2001. He stepped down from 4 Cs to become the 4th Chairman of Science Board of PICES. During his time on the 4 Cs project, he was a member of the 4Cs’ MODEL Task Team, which he co-chaired for three years in the late 1990s. Ian contributed to more than just PICES. He was a leading scientist of the IGBP/SCOR/IOC sponsored GLOBEC project, which was the first interdisciplinary project that connected physical oceanographers, climate scientists, fisheries scientists and numerical models to understand fish and ecosystem dynamics. Ian served as the first Vice-Chair of GLOBEC (1996-2002) and as its last Chairman (from 2008-2010). Ian subsequently served as the co-chair of the IMBER Human Dimensions Working Group. This resulted in his making important contributions to PICES Human Dimension activities, including the current FUTURE program. Ian has an extensive publication record with more than 150 peer reviewed publications. Included in this are 19 books, book chapters or edited volumes since 1986. He has published three books for other organizations (GLOBEC and IMBER) which are equally important for the current activities of PICES.

Ian has been a regular participant at almost every PICES Annual Meeting since 1995. The next series of slides shows images of him at PICES Meetings between 1995 and 2008. [slides 20-22]. PICES-2001—Ian’s first year as Science Board Chair and guest to Governing Council (Victoria). 2002 was a remarkably productive and busy year, as PICES cosponsored 5 symposia/conferences during the year. Ian must have loved the end of that year. For all of his scientific accomplishments, Ian has remained a humble and down-to-earth guy, and a friend and colleague to many. Please join me once again in congratulating Dr. Ian Perry as the recipient of the PICES-2019 Warren S. Wooster Award.

Please join me in congratulating Dr. Ian Perry as the recipient of the 2019 Wooster Award.

Wow! This morning, I stand before you speechless – which for those who know me is not my usual state-of-affairs. This comes as a complete surprise, and I am deeply honoured – although somehow my family has managed to be here this morning!

As Dr. Lowe mentioned in her opening remarks, I was at the first PICES Meeting, which was held in this very Conference Centre. Through that early involvement, I had the great privilege of getting to know Dr. Wooster personally, and to work with him in the planning and development of PICES’ first major integrating program on Climate Change and Carrying Capacity in the North Pacific – the “4C’s” program. Warren had an amazing knack for thinking up a catchy acronym and then building an entire program around it. And I would like to recognise that another of my mentors, and my graduate advisor, Dr. Tim Parsons, for some reason also happens to be here in the audience this morning – which is very special for me.

PICES has been very good to me, and any successes I may have had have largely been because of the support of my friends and colleagues in this audience. And so I would like to conclude by issuing you a challenge: while the organisational structure of PICES may seem very complex, as you get more involved the structure becomes clearer, and you will make lots of new friends and discover exciting new science opportunities. I am sure that future Wooster Award recipients are already with us this morning.