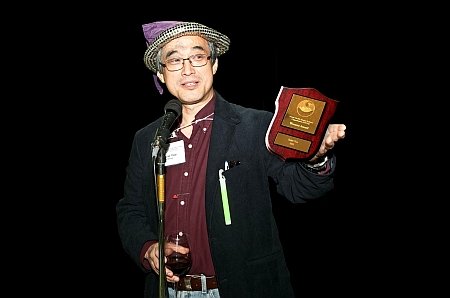 At the 2021 PICES Virtual Annual Meeting in Victoria, Canada, it was announced that Dr. Sinjae Yoo (Korea Institute of Ocean Science and Technology (KIOST)) was the recipient of the 21st Wooster Award.

The presentation ceremony took place virtually on October 25, 2021 in Victoria, BC, Canada, during the Opening Session at PICES-2021 and was conducted by Drs. Enrique Curchitser (PICES Chair) and Vera Trainer (PICES Science Board Chair). Dr. Vera Trainer introduced the Wooster Award and read the following citation.

In 2000, PICES Governing Council approved an award named in honour of Professor Warren S. Wooster, a principal founder and the first Chairman of PICES, and a world-renowned researcher and statesman in the area of climate variability and fisheries production. The criteria for selection are sustained excellence in research, teaching, administration or a combination of the three in the area of North Pacific marine science. Special consideration is given to individuals who have worked in integrating the disciplines of marine science, and preference is given to individuals who were or are currently actively involved in PICES activities. Please join me in congratulating the recipient of the 2021 Wooster Award, Dr. Sinjae Yoo.

Dr. Sinjae Yoo is a biological oceanographer who served as a research scientist at the Korea Institute of Ocean Science and Technology (KIOST), based in Busan, Korea, for more than 30 years. He retired from KIOST in 2020 and is currently a consultant for the International Cooperation Department at KIOST. He has also been a professor at the Korea Maritime and Ocean University and the University of Science and Technology, Korea. Sinjae has also served as the President of the Scientific Committee on Oceanic Research (SCOR) since 2020. Since joining KORDI in 1988, (which is now KIOST) Sinjae’s scientific interests have been primary production and phytoplankton dynamics, which he has studied in Korean waters. In the early 1990s, he became fascinated by the synoptic views provided by remote sensing and began to use satellite data to study phytoplankton. Recently, he has expanded his major research direction to the theoretical study of ecological interactions.

Over the years, Sinjae has been involved in various PICES activities. In the 1990s, he participated in the MODEL Task Team of the Climate Change and Carrying Capacity(CCCC) Program. After 2000, he contributed to the activities of the Biological Oceanography Committee and the Science Board. More recently, he served on the Science Board as Vice-Chair (2007-2010) and Chair (2010-2013). One of his most recent services is as Co-Chair of WG-35, who - through the significant efforts of the Co-Chairs and working Group members, published the third North Pacific Ecosystem Status Synthesis Report (NPESR III) in 2021.

Looking at his success as a scientist, you may think his career path has never wavered. However, just like everyone else, he had a moment standing at the fork in the road in his younger days. 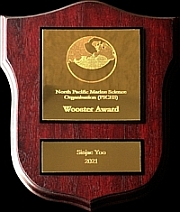 I don’t know what to say. Sometime ago, when Sanae Chiba (PICES Deputy Executive Secretary) asked me to attend this ceremony, I didn’t suspect this, although there was something unusual in her tone... but I thought as a SCOR representative, I should attend this ceremony. I didn’t suspect this, because I’ve never thought I’m entitled to this great award. There are so many better scientists who have contributed more than me. I’m just overwhelmed. You’re too generous! I feel I am paid for the things I haven’t delivered yet, so, I think I should work harder to pay this back. Thank you for this video as well. Thank you.