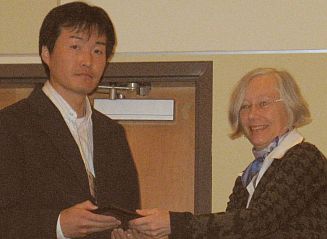 At the 2013 PICES Annual Meeting in Nanaimo, BC, Canada, it was announced that A-line Monitoring Program was the recipient of the 6th POMA Award.

The presentation ceremony took place on October 14, 2013, during the PICES-2013 Opening Session. It was conducted by Drs. Laura Richards (PICES Chairman) and Sinjae Yoo (PICES Science Board Chairman). A commemorative plaque and a certificate were presented to Dr. Hiroshi Kuroda, who received the award on behalf of A-line Monitoring Program.

Science Board citation for the 2013 POMA Award

The Oyashio is a cold western boundary current flowing southward from the Kurile Islands to Hokkaido, Japan. "Oya" in Japanese means "parents" or "source" and "shio" means "current". Thus, Oyashio means "a current that provides rich marine products". This area is known as a good fishery ground for Japanese sardine, walleye pollock and other species. Because of its high productivity, Oyashio has fascinated biological oceanographers, fisheries scientists, and physical oceanographers. Not so long ago, there was relatively little information about its physical properties, ecosystem structure and mechanisms for maintaining its high productivity. It was clear that a continuous ocean monitoring system was needed to begin to understand fisheries oceanography in Oyashio area.

Twenty-six years ago in 1987, the first of many A-line observations was made by scientists at the Hokkaido National Fisheries Research Institute, led by Dr. Makoto Kashiwai (the second Science Board Chairman of PICES). The 3-year project on "Oyashio water" focused on its physical oceanography. The "A" in A-line is taken from the first letter of Akkeshi Bay, near the first station of the A-line. This project ended in 1990, but the enthusiasm of a new group of scientists expanded A-line monitoring to include physical, chemical and biological properties of the Oyashio ecosystem and the search for key factors associated with its high productivity. In 2002, the Tohoku National Fisheries Research Institute joined the effort and has been conducting 5-7 cruises per year up to the present. During that time, A-line monitoring program has made outstanding achievements related to understanding the Oyashio and its ecosystem.

An important characteristic of the A-line monitoring program is the close cooperation among scientists of different disciplines. It inspired the development of ecosystem models by the MODEL Task Team in PICES. The NEMURO model and its daughter models are now used in marine sciences all over the world. The A-line was also the site of iron fertilization experiments coordinated by the PICES Advisory Panel on Iron Fertilization Experiment in the Subarctic Pacific Ocean. They found that iron controlled the productivity of the North Pacific and found east-west differences in iron concentration and iron species composition. Repeated monitoring in the A-line region discovered that the Sea of Okhotsk is an important source of iron in the western subarctic Pacific. Long-term observations have helped to clarify relationships between the physical environment and living marine resources, and revealed the mechanisms for long term variation of ocean ecosystems of the western North Pacific in relation to the global warming and/or Pacific Decadal Oscillation.

A-line Monitoring Program has fostered oceanography and fisheries science in the western North Pacific, with many papers presented annually at PICES Annual Meetings and symposia and workshops sponsored by PICES. A-line monitoring will continue to provide important data to understand the future ecosystem change related to the global change and contribute to the development of ocean science of the North Pacific.

PICES Science Board is honouring the A-line Monitoring Program with the 2013 PICES Ocean Monitoring Service Award for its contributions to understanding the past and future oceanography of the North Pacific. Congratulations!

Thank you very much for this award. I am the newest participant of the A-line monitoring, but I do not have a strong constitution against seasickness. Whenever I feel seasick on a ship, I am always mindful of the conditions that crew and researchers must work under. I respect and am very proud of all of the participants and contributors, particularly, captains, officers and crew of Research Vessels Hokko-maru and Wakataka-maru. This award will encourage us - all the participants and contributors. I would like to thank PICES deeply.