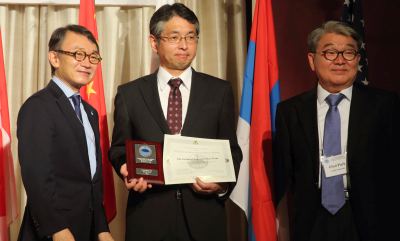 At the 2018 PICES Annual Meeting in Yokohama, Japan, the International Argo Steering Team was announced as the recipient of the 11th POMA Award.

The presentation ceremony took place on October 28, 2018, during the Opening Session at PICES-2018 and was conducted by Dr. Hiroaki Saito (PICES Science Board Chair).

Dr. Saito introduced the award and read the following citation.

Science Board citation for the 2018 POMA

The PICES Ocean Monitoring Service Award (POMA) recognizes organizations, groups and outstanding individuals that have contributed significantly to the advancement of marine science in the North Pacific through long-term ocean monitoring and data management. The award also strives to enlighten the public on the importance of those activities as fundamental to marine science. It draws attention to an important aspect of the PICES Convention that is less appreciated: “to promote the collection and exchange of information and data related to marine scientific research in the area concerned”.

Please join me in congratulating the recipient of the 2018 POMA Award, which is the International Argo Steering Team.

The Argo concept was approved at the OceanObs meeting in 1999, and the Argo Steering Team met for the first time in 2001. Looking at 137 floats in the oceans in January 2001 it was hard to imagine this becoming a global array. The array grew rapidly achieving 1000 operational floats in January 2004. By September 2005 there were more than 2000 floats operating. And in November 2007 the original target of 3000 floats was achieved. At this point growth in the size of the array slowed, but profiles were being gathered at an unprecedented rate. In December 2008 with 3236 floats in the water, the half-millionth profile was acquired. In October 2012, the one-millionth profile was acquired. The array has continued to grow, albeit slowly, and in January 2016 the count of active floats exceeded 4000. Around the 10th November 2018, the number of profiles acquired will exceed 2 million.

The number of Argo profiles is impressive. But a greater accomplishment is the suppression of the “summer bias” in the Southern Ocean…

Argo floats do not get sea-sick and last a long time, the most recent versions offering lifetimes exceeding 7 years.

Global targets like these by Argo can only be achieved with exemplary international cooperation. So far 40 nations have deployed floats in support of Argo, and that includes all six PICES member countries.

It has always been seen as a problem that Argo floats sampled only the top 2000 metres of the ocean, but we now have a small, but growing, number of floats capable of sampling much deeper to either 4000 or 6000 meters. The Deep-Argo program is a reality.

Also a reality is the Bio-Geochemical Argo array, which this year received the blessing and approval of the Intergovernmental Oceanographic Commission. All floats still sample temperature and salinity, but many now carry a wide array of BGC sensors—such as pH, nitrate, chlorophyll and oxygen. PICES should note both the under-representation of the North Pacific in the BGC array and the lack of plans to address this deficit.

There is a hopeful sign in an announcement from the Government of Canada to invest heavily in BGC Argo. This is in response to a recent meeting of the G7 Environment Ministers.

All Argo nations have agreed to a single, uniform data policy. All data are supposed to be delivered in near real-time (in practise, 90% of profiles are delivered within 24 hours of acquisition). All data are available to anyone on the planet in a common data format and with a common approach to real-time and delayed-mode quality control.

With such extensive coverage of samples and the data readily available it should come as no surprise that Argo data are heavily used. There are so many scientific accomplishments attributable to Argo that it does not seem realistic to start listing them. We just note that as the array grew, so did the use of Argo data. From 2015 onwards, papers that incorporate Argo data are being published faster than one per day. Next week the 6th Argo Science Workshop will take place in Tokyo, not far from here. There will be an opportunity to celebrate the upcoming 2-millionth profile.

I am greatly honored and also humbled to accept the PICES Ocean Monitoring Service Award on behalf of the International Argo Steering Team. Argo is an international program to deploy and maintain the global array of profiling floats and ensure the timely data delivery through its elaborated data system. It would never have been achieved without the continuous efforts by all the Argonauts from about 30 participating countries and their strong international cooperation. Because of that, this award is for the whole Argo community.

This award appears very timely because 2018 will be remembered as a milestone year for the International Argo Program. Argo is reaching 4,000 operational floats and two million profiles will be achieved during this year. Furthermore, the Intergovernmental Oceanographic Commission of UNESCO formally approved the global implementation of Biogeochemical Argo early this year. Such a major extension requires increased engagement with wider communities, including ecosystem science and fisheries science. The Argo program is expecting PICES' leadership in this regard. I believe this award will give momentum to stronger future collaboration between Argo and PICES. Thank you very much.