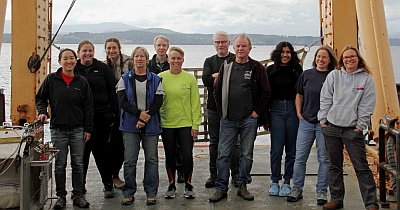 At the 2020 PICES Virtual Annual Meeting, La Perouse Program, DFO Canada, was announced as the recipient of the 12th POMA Award.

The presentation ceremony took place on October 26, 2020, during the Opening Session at PICES-2020 and was conducted by Dr. Vera Trainer (PICES Science Board Chair).

Science Board citation for the 2020 POMA

The PICES Ocean Monitoring Service Award (POMA) recognizes organizations, groups and outstanding individuals that have contributed significantly to the advancement of marine science in the North Pacific through long-term ocean monitoring and data management. The award also strives to enlighten the public on the importance of those activities as fundamental to marine science. It draws attention to an important aspect of the PICES Convention that is less appreciated: “to promote the collection and exchange of information and data related to marine scientific research in the area concerned”.

Please join me in congratulating the recipient of the 2020 POMA Award, which is La Perouse Program, DFO Canada.

The La Perouse Program was initiated in 1979 by Dr. David Mackas of Fisheries and Oceans Canada’s Institute of Ocean Sciences, located in Sidney, BC. The sampling consists of two to four shipboard surveys each year, with between 10 to 30 stations sampled from each of four regions that circumnavigate Vancouver Island. The program has always included a full suite of physical and biological observations. All physical data are archived in the Fisheries and Oceans Canada water properties database, and are searchable through the web (Waterproperties.ca). Zooplankton data are archived by the Ocean Ecology group at the Institute of Ocean Sciences, and are freely available through the Canadian data Geoportal at https://open.canada.ca.

The zooplankton data from the La Perouse program is contributed to both the NOAA COPEPOD database, and the IOC-UNESCO International Group for Marine Ecological time Series (IGMETS) project (http://igmets.net/).

There are at least 98 publications from research done on the La Perouse cruises. Twenty-three additional reports have provided contributions to the West Coast of Canada State of Pacific Ocean Reports.

It is well deserved that the La Perouse survey program is being recognized by PICES for the 41 years of surveys that they have accomplished since 1979. Key personnel associated with the program since 1979 include Dr. David Mackas, Mr. Rod Forbes, Mr. Douglas Moore, Mr. Douglas Yelland, Ms. Moira Galbraith, Ms. Kelly Young, Ms. Nina Nemcek, Ms. Marie Robert, Dr. Ian Perry¸ Dr. Angelica Peña, Dr. Ken Denman and many others too numerous to mention. Dr. Akash Sastri is currently responsible for leading the La Perouse surveys.