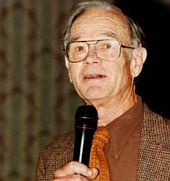 At the 2003 PICES Annual Meeting in Seoul, Korea, it was announced that Dr. William (Bill) G. Pearcy (Oregon State University, U.S.A.) was the recipient of the third annual Wooster Award.

The presentation ceremony took place on October 13, 2003, during the PICES-2003 Opening Session. The Science Board citation was presented by Dr. Ian Perry, Science Board Chairman, and included in the 2003 Annual Report (www.pices.int/publications/annual_reports/). Dr. Vera Alexander, PICES Chairman, presented a commemorative plaque to Dr. George Bohlert, US National Delegate, who received the paque on behalf of Dr. Pearcy. Dr. Alexander also read the tribute sent by Dr. Wooster.

Dr. William Pearcy is a world-renowned authority on many aspects of biological oceanography, in particular his extensive work on fishes and squids in the North Pacific. He has made significant contributions to many areas of marine research, including fisheries oceanography, the ecology of deep-sea and open ocean fishes and squids, the trophic dynamics of marine fishes, and pollution and trace metals in the marine environment. He is perhaps best known recently for his contributions to understanding all aspects of Northeast Pacific salmon during their ocean phase. He has over 150 publications in many of the major scientific journals, including Science and Nature. He has demonstrated sustained excellence in teaching during his years as a professor in the College of Oceanic and Atmospheric Sciences at Oregon State University, where he was major advisor for over 30 graduate students and a committee member for at least 50 more. He has served on numerous international committees, including those of PICES. He was involved with PICES and its committees very early on, and he gave the keynote address at the 1997 PICES Annual Meeting on his work on salmon in the North Pacific. Since his retirement, he has worked tirelessly on a State panel to examine ways to restore natural runs of salmon to Oregon. Science Board is very pleased to name him as the recipient of the PICES Wooster Award for 2003.

I cannot remember when I first met Bill Pearcy, but twenty years ago we first interacted on the question of environmental variability and its effects on fisheries. In May 1983, we convened a workshop at the University of Washington to review existing knowledge on ocean and fish variability and to develop a strategy for investigation of the interactions. In November that year, Bill Pearcy at Oregon State University held another workshop, on the influence of ocean conditions on the production of salmonids in the North Pacific. These two workshops and the resulting publications focused attention on the importance of environmental influence on marine ecosystems.

Bill Pearcy has been a pioneer in what I like to call "salmon oceanography". Students of these charismatic fish have had a curious fixation on the fresh water phase of their life, after which the fish just disappeared into the black box we call the ocean. As an oceanographer, Bill knew that life in the black box was important to salmon, and was interesting, and complex, as he, with his students and colleagues have successfully demonstrated. This work has exemplified the spirit of PICES where fishery science is intimately linked with the other disciplines necessary for ecosystem studies - meteorology and climatology, oceanography of the several flavors (physical, chemical, biological) and ecology in the broader sense. Of course, as the Science Board citation makes clear, Bill Pearcy's interests are by no way limited to salmon or even to fish. His scientific perspective, both broad and deep, makes him a worthy recipient of the PICES Wooster Award for 2003.

This is indeed a great honor! And I deeply regret not being here. Grape harvest and a visit from distinct friends have intervened.

This is not just a prestigious honor for me - it is for all my colleagues, students and friends that have inspired, collaborated and helped me throughout my years in science. This includes many PICES scientists, including many here today. It includes colleagues on PICES and SCOR Working Groups, and my Japanese friends from the University of Tokyo and Hokkaido University, and the crews aboard many cruises of the Oshoro Maru.

And I especially thank my loyal friend, Papa Wooster, father of PICES, for this award and for a number of other reasons. Warren prompted me to give the lectures for his series on recruitment fishery oceanography at the University of Washington. This resulted in my little book on Ocean Ecology of North Pacific Salmonids, published in this series by Washington Sea Grant. He also encouraged my participation in workshops and subsequent publications in Interannual Variability of the Environment and Fisheries of the Gulf of Alaska and the Eastern Bering Sea (1983) and El Niño North, Niño Effects in the Eastern Subarctic Pacific Ocean (1985). The 1982-83 El Niño was a nail in the coffin that the ocean had an unlimited carrying capacity for salmonids and as a result stimulated a surge in research on the importance of the ocean lives of anadromous salmonids' research that is prolific today.

I consider Warren to be the venerable, world-renowned fishery oceanographer of the 20th and now the 21st centuries. He has made grand contributions to the world organization and community of oceanographers and marine biologists. He is an inspiration for all of us. Banzai, Warren! 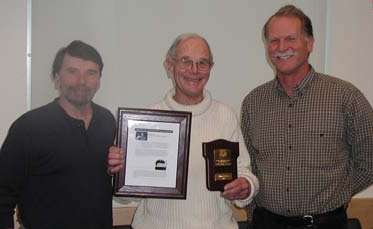 After the “presentation ceremony” at the Oregon State University, Dr. Bill Pearcy (middle) poses with Drs. Ric Brodeur (former student and friend of Bill, left) and George Boehlert (Director of the Hatfield Marine Science Center at OSU, right), with a commemoration from OSU and the Wooster Award plaque in hand.