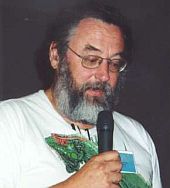 At the 2004 PICES Annual Meeting in Honolulu, U.S.A., it was announced that Dr. Paul H. LeBlond (University of British Columbia, Canada) was the recipient of the fourth annual Wooster Award.

The presentation ceremony took place on October 18, 2004, during the PICES-2004 Opening Session. The Science Board citation was presented by Dr. Ian Perry, Science Board Chairman, and included in the 2004 Annual Report (www.pices.int/publications/annual_reports/). A commemorative plaque was given to Dr. LeBlond by Dr. Vera Alexander, PICES Chairman.

Dr. Paul LeBlond has had a distinguished scientific, educational and public service career, which has contributed to the marine sciences generally and specifically to many of the goals of PICES. He has authored or co-authored more than 90 primary journal publications, 20 conference proceedings, and two books spanning a wide variety of physical and biological topics, many of which link fisheries research problems with changing physical oceanographic conditions in the North Pacific Ocean. His list of contributions also includes publications under the headings of Science Education, Book Reviews, Cryptozoology, Engineering Studies, Historical, Public Services, Marine Conservation, and Fun. The section under Cryptozoology alone has over 21 publications. Dr. LeBlond has remained one of the world's leading physical oceanographers throughout his distinguished career, and has supervised over 40 graduate students. He has lectured at several universities throughout the world, including onboard a cruise ship traveling the South Pacific. Dr. LeBlond has also served PICES well, as a member and then Chairman of the Physical Oceanography and Climate Committee, Chairman of WG 7 on Modeling of the Subarctic North Pacific Circulation, and Co-Chairman of the Scientific Steering Committee for the first major inter-sessional international conference organized by PICES entitled "Beyond El Niño". He has been the recipient of several Canadian and international marine science awards, and has been a member or chaired a number of important Canadian public marine science committees. The diversity and excellence of Dr. LeBlond's science, his significant contributions to university education and public awareness of marine problems, the recognition he has received through major awards from his peers, and his unselfish participation in national and international ecology and environmental committees, makes him a deserving candidate for this award.

Dr. Warren Wooster provided brief remarks on the selection of Dr. LeBlond as the recipient of the 2004 Wooster Award:

I applaud the Science Board selection of Paul LeBlond to receive this award. Their citation makes the case very clear. I would like to comment on two points.

The first point relates to the interdisciplinary nature of marine science. Paul is a physical oceanographer, a species well known for avoiding involvement in messy fishery questions. But he early recognized that changes in ocean circulation and mixing had impact on fish populations and therefore has contributed actively to the work of several Canadian fishery conservation organizations. This is exactly the kind of miscegenation PICES has tried to promote!

Paul's career had been carried out in academia, at the University of British Columbia, where much of his teaching and research had been highly relevant to the work of PICES. As in the case in other member countries, such work is not done exclusively, or even principally, in government laboratories. This is evident in the makeup of delegations to PICES meetings where, for example, participation from Japan, Korea, and the US, has usually been equally divided between government and academic scientists. Academic participation from other members tends to be significantly less. Yet not all wisdom is to be found in government laboratories - as Paul might say, au contraire! I hope this point can be kept in mind by governments when identifying those to be supported for PICES participation.

Madame la Presidente, distingues delegues, chers collegues! It is a great honour for me to receive the Wooster Award and to find myself in the company of previous award recipients, Michael Mullin, Yutaka Nagata and Bill Pearcy, all of whom I met and learned to appreciate at previous PICES meetings. I am also particularly delighted to be more closely associated, through this award, with our founding father, Warren Wooster, who is here with us today. Warren's child, PICES, is now holding its Thirteenth Annual Meeting: PICES is now a teen-ager! Teen-age years are a period of great turmoil in human development. I am happy to say that I can detect no such turmoil in PICES, the institution. More importantly, I detect no evidence of a more common and graver symptom of maturing institutions: the tendency to crystallize into formality, to replace youthful enthusiasm with routine and protocol. One way for an institution to retain its youthful dynamism is to attract young people to its fold, or at least to ensure that its supporters remain young-at-heart. So, in gratitude for this award, I offer two wishes. To all of you as individuals, I wish that you remain young-at-heart and full of joie-de-vivre: may you all follow in the footsteps of our founding father, who was already past usual retirement age when he gave birth to PICES. To PICES as an institution, I offer the wish of continuing youthful and dynamic success for years and years to come. Thank you again!