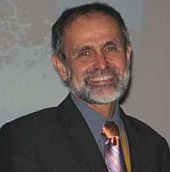 At the 2007 PICES Annual Meeting in Victoria, Canada, it was announced that Dr. Kenneth L. Denman (Fisheries and Oceans Canada and Canadian Centre for Climate Modelling and Analysis) was the recipient of the 7th annual Wooster Award.

The presentation ceremony took place on October 29, 2007, during the PICES-2007 Opening Session. The Science Board citation was presented by Dr. Kuh Kim, Science Board Chairman, and included in the 2007 Annual Report (www.pices.int/publications/annual_reports/). A commemorative plaque was given to Dr. Denman by Dr. Tokio Wada, PICES Chairman, who also read the tribute sent by Dr. Wooster.

It gives me great pleasure to announce that the Wooster Award for 2007 is being given to Dr. Kenneth L. Denman, a world-renowned interdisciplinary ocean scientist.

Ken has authored more than 75 primary journal articles, book chapters or review papers on air-sea interaction, lower trophic-level biological production, and the role of the ocean in the global climate system. He was born and raised in the city of Calgary, Alberta. For those of you unfamiliar with Canadian geography, Calgary is located in the transition zone between the foothills of the Rocky Mountains and the vast Canadian prairie. Calgary is a long, long way from any ocean. As you will see in the accompanying photos, Ken never lost his affinity for mountains.

After completing a Bachelor of Science degree at the University of Calgary, Ken began graduate studies in physical oceanography at the Institute of Oceanography at the University of British Columbia, under the direction of Prof. Mike Miyake. The Institute was best known at that time for its advanced work on air-sea interaction, but the influence of Prof. Tim Parsons and others at the Institute stimulated what were, at the time, novel interdisciplinary collaborations. This was to have a significant effect on Ken's career.

With his shiny new Ph.D. in hand, Ken took a position as junior scientist at the Bedford Institute of Oceanography where he worked closely with Trevor Platt. They applied approaches used in meteorology and physical oceanography to the study of plankton. This was an important contribution to biological oceanography as the field was then dominated by descriptive science. The application of advanced analytical techniques to field data, satellite observations and numerical models is a hallmark of Ken's career.

In 1977, he returned to the Pacific coast as a research scientist in the Ocean Ecology Laboratory at the newly constructed Institute of Ocean Sciences (IOS). He continued to apply advanced techniques to practical problems in biological oceanography. In recognition of his skill, energy and leadership, Ken was promoted to senior positions in science and management in the Department, where Ken eventually discovered his deep dislike for matters of bureaucracy and administration, and returned to being a senior research scientist at IOS.

Having bridged the fields of physical and biological oceanography, Ken turned his attention to chemistry, to the ocean carbon cycle, and to its importance in the global climate system. He played a leading role in many aspects of both the international and Canadian JGOFS, GLOBEC and SOLAS programs. These interests ultimately led him to work on the Intergovernmental Panel on Climate Change (IPCC) as a convenor and Lead Author in the 1995 Assessment, and as Coordinating Lead Author for the Fourth Assessment Report that was completed last spring. He shares with his IPCC colleagues the reward of a Nobel Peace Prize "for their efforts to build up and disseminate greater knowledge about man-made climate change, and to lay the foundations for the measures that are needed to counteract such change."

Ken was very active in the earlier history of PICES. He was a Canadian member of the BIO Committee from its very first meetings until 2000, a member of Working Group 6 on the Subarctic Gyre, and Working Group 7 on Modeling Ocean Circulation. He worked to integrate the JGOFS North Pacific Task Team into PICES activities. In addition to his personal contributions to science, he also mentored, encouraged and entrained younger scientists into PICES activities. Many of these individuals are in the room today - you know who you are!

Please join me in congratulating Dr. Kenneth Denman as the 2007 Wooster Award winner.

It is a privilege to endorse the selection of Ken Denman for the Wooster Award, not only for his many services to PICES but also for his cross-disciplinary scientific approach that epitomizes the aspirations of PICES from its inception. When I read his list of research interests and resulting publications, I see them all as significant contributions to the unifying question that has motivated the organization from the beginning - "What is the nature of the subarctic Pacific ecosystem and how is it affected over periods of months to centuries by changes in the physical environment, by interactions among components of the ecosystem, and by human activities?" In particular, he has brought his insight as a physicist to an assessment of the physical and biological mechanisms whereby these ecosystem changes are effected. It is through the efforts of Ken Denman and his colleagues, and the support of organizations such as PICES, that we can hope one day to establish a more sustainable relationship with the North Pacific and its flora and fauna.

It is a great honour and privilege to be selected as the recipient of the 2007 Wooster Award. The citation is very flattering, and I would like to thank the people who nominated me for the award. I first went to Ocean Station Papa in May 1972, early in the 51 years of oceanographic sampling there, although at the time I thought that it was already a very long time series. Since then, except for five years when I worked at the Bedford Institute of Oceanography in Halifax on Canada's Atlantic coast, I have worked towards understanding first the physics, then the planktonic ecology, and more recently the biogeochemistry of the subarctic Northeast Pacific Ocean. Two Canadian scientists from the Department of Fisheries and Oceans influenced my scientific path early on. First, Sus Tabata had published two fascinating papers on the time series measurements at Ocean Station Papa that guided my Ph.D. thesis research on the dynamics of the upper mixed layer of the ocean. Second, Tim Parsons, as I was finishing my thesis, encouraged me to look beyond physics and apply my expertise in physics to the planktonic ecosystem and related biogeo-chemical cycles. I followed his advice and as a result have had a wonderful and fascinating career studying the interactions between physical, biological and chemical processes in the North Pacific. So, I thank you all for this great honour, and I thank Warren Wooster for his vision and perseverance in getting PICES started.