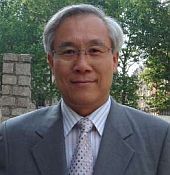 At the 2009 PICES Annual Meeting in Jeju, Korea, it was announced that Dr. Kuh Kim (Pohang University of Science and Technology) was the recipient of the 9th annual Wooster Award.

The presentation ceremony took place on October 26, 2009, during the PICES-2009 Opening Session. The Science Board citation was presented by Dr. John Stein, Science Board Chairman, and included in the 2008 Annual Report (www.pices.int/publications/annual_reports/). A commemorative plaque was given to Dr. Kim by Dr. Tokio Wada, PICES Chairman.

Today, it is a great pleasure to present to you Professor Kuh Kim, the recipient of the 2009 Wooster Award. Professor Kim has been active in PICES, serving first as a member of the Physical Oceanography and Climate (or POC) Committee since 1996, as Chairman of this Committee from 2001 to 2004, and as Chairman of the PICES Science Board from 2004 to 2007.

In addition to Professor Kim’s international scientific leadership in PICES, his collaborative research in the western Pacific was pivotal in the initiation and success of the regional program on “Circulation Research in East Asian Marginal Seas” (CREAMS). The scientific foundation for CREAMS arose from his landmark papers entitled “Characteristics of physical properties in the Ulleung Basin” and "Identification of water masses in the Yellow Sea and the East China Sea by cluster analysis”. CREAMS is now in its third phase. The PICES Science Board endorsed the CREAMS/PICES Program at the 2004 Annual Meeting as one of the key POC and PICES activities, and following this endorsement, the Korean government initiated the Korean CREAMS/PICES Program in 2006, which was the product of significant efforts by Professor Kim and his colleagues, and it is anticipated that the CREAMS/PICES Program will continue to be one of the regional projects of PICES’ new integrative science program, FUTURE.

CREAMS is but one international program that Professor Kim has been a key participant of. Korea is an important contributor to the global Argo array, and this is largely through the efforts and initiative of Prof. Kim. He represented Korea on the Argo Steering Team from the moment it was created until 2008, and was the one who helped to make the free and open data policy work. Without the free and open data policy, Argo would have had a short history.

Professor Kim’s international leadership is matched, if not exceeded, by his scientific achievements and development of the next generation of physical oceanographers and marine scientists. He has mentored many students and colleagues who have gone on to productive careers, and he has published more than 70 scientific papers, including a contribution to the 4th Assessment Report of the Intergovernmental Panel on Climate Change.

Professor Kim’s accomplishments are many, and he continues to be strongly involved with his science career. Recently, he has moved from Seoul National University to Pohang University of Science and Technology to lead the establishment of a world-class graduate school of oceanography. This will be the last challenge in his exemplary research and education career. But given his stellar record as a scientist and educator, and his enthusiasm, there is little doubt that he will be successful.

Please join me in congratulating my predecessor as Science Board Chairman, Professor Kuh Kim, as the 2009 Wooster Award recipient.

I would like to thank all of you who nominated me for this award, and the Science Board for selecting me. As I was on the Science Board as a member and later as its Chairman, I know well that very significant scientific contributions to the North Pacific and its marginal seas in research, education, and/or administration are required to receive this award. I am afraid that my record is short of meeting these criteria, as previous recipients of this award have left far-reaching footprints. So my guess is that this time the PICES Science Board probably decided to send a message that we oceanographers should continue to explore the sea as often as possible for more data to understand the oceans better and deeper as I did as a theoretician. We have a relatively good understanding on processes in the surface layer of the oceans, as large amounts of data are available from various platforms such as satellites, drifters and moorings. However, data from the deep ocean are very limited in space and time, and so is our understanding, despite the fact that it occupies most of the oceans. For example, the understanding of climate change requires data from the whole water column of the oceans in time. Our approach should be multi-disciplinary and comprehensive. I like to emphasize that international collaboration is essential to make any progress in understanding the world ocean.

Without any exception, all my works are the results of collaborations at sea and in the laboratory with graduate students of the Ocean Circulation Laboratory at Seoul National University, and with friends and colleagues from PICES member countries for the last 30 years. My students had sleepless nights. I had selfless support from colleagues like Howard Freeland who helped me to start the Argo program in Korea. I would like to take this opportunity to thank great teachers like Henry Stommel and Peter Rhines, who taught me how to intertwine fluid dynamics and sea-going oceanography, and Kyung-Ryul Kim and Masaki Takematsu for their solid commitment and encouragement for science. Seoul National University has never had a research vessel, and I am deeply indebted to captains and crew of so many vessels ranging from a small chartered fishing boat, which lost its engine power and drifted for hours off the southern coast of Korea, to a Russian research vessel which had a serious CTD winch problem soon after sailing from Pusan Port for the first expedition of CREAMS in 1993, but where a replacement for its slip-ring was miraculously found. The first data of CREAMS were collected successfully on board this vessel, leading to the discovery of new water masses and changes in the thermohaline circulation in the Japan/East Sea. I am extremely lucky and fortunate to have met so many wonderful and dedicated people. I thank everyone who ever worked with me to reach the unknown.

I am proud of being part of PICES. Thank you again.

Dr. Kuh Kim was elected Chairman of the PICES Science Board in October 2004, at PICES XIII in Honolulu, Hawaii, U.S.A. Kuh was born and raised in Seoul, Korea. In his childhood, he dreamed of being an inventor and natural scientist someday, after reading stories about Thomas Edison. Kuh’s experiment with a home-made rocket that he made failed and caused a complete loss of his eyesight for a while when he was 13 years old, but fortunately he recovered with minor damage, and graduated from middle school with the highest honor. Kuh became interested in geometry in his high school days and entered the Department of Mathematics, College of Natural Sciences, Seoul National University in 1964. In his second year in college, he had a chance to take a boat, for the first time in his life, from one port to another along the southern coast of Korea, and found another world which had been yet unknown to him. This experience led him to transfer to the Department of Physics to study fluid mechanics under the late Prof. Chul-Soo Kim, his lifetime mentor. Kuh was advised to further his study on fluid mechanics at the Graduate School of Seoul National University. Kuh’s research for his Master of Science degree on the instability of conducting fluid between two rotating, concentric cylinders was published in the Journal of Physical Society of Japan in 1970 as his first scientific paper. Kuh wrote in his application to the Massachusetts Institute of Technology (M.I.T.)–Woods Hole Oceanogra-phic Institution Joint Program of Oceanography, that our understanding of the ocean is far less than of the moon, and was admitted with a Whitney Fellowship from M.I.T in 1970. There, Kuh became fascinated in the dynamics of ocean currents as he participated in several cruises of the Mid-Ocean Dynamics Experiments, during which the complexity of meso-scale ocean currents was unravelled for the first time. He completed his PhD in 1975 on “Instability and Energetics in a Baroclinic Ocean”, which was published in Deep-Sea Research in 1978.

Kuh joined the Department of Oceanography, Seoul National University in 1978, and introduced new knowledge and methods which were emerging out of intense programs, such as MODE and POLYMODE, to investigate ocean currents around Korea and neighboring countries. In particular, Kuh recognized that international collaborations are essential for a complete understanding of ocean currents and circulation in Asian marginal seas and worked closely with the late Prof. Takashi Ichiye of the Texas A&M University (U.S.A.) and Prof. Kenzo Takano of the Tsukuba University (Japan) to organize the First JECSS (Japan/East and East China Seas Study) Workshop in 1981, at Tsukuba University. Since then, JECSS workshops have been held every two years, providing a unique forum for sharing scientific interests, knowledge, new findings and data among marine scientists from not only Asian countries, but also from the U.S.A., U.K., France, Italy and other countries. Over time, the area of common interests has expanded and interactions between Asian marginal seas and the North Pacific Ocean have become an important subject of many presentations. Thus the workshop became PAMS (Pacific-Asian Marginal Seas)/JECSS and its 13th Workshop has just been held July 13-15, 2005, in Bali, Indonesia. Kuh has been serving as Chairman of PAMS/JECSS Steering Committee since 1993.

Kuh also organized international expeditions called CREAMS (Circulation Research of the East Asian Marginal Seas) to investigate the circulation and its variability in the Japan/East Sea during 1993–1998 with Japanese and Russian colleagues. Precise CTD data together with direct observations of currents in the deep waters of the Japan/East Sea revealed, for the first time, that this sea resembles big basins such as the Pacific Ocean and the Atlantic Ocean in its hydrographic structures, proving that it is, indeed, a miniature ocean. Kuh gave an opening lecture on CREAMS as a model study for an international and interdisciplinary project at PICES VI, October 1997. In 1999-2004 CREAMS-II became the largest and most extensive project in the Japan/East Sea as more than 20 U.S. marine scientists from the Scripps Institution of Oceanography, Woods Hole Oceanographic Institution, University of Washington, University of Rhode Island, the Naval Research Laboratory and other institutions participated in the Japan/East Sea Program supported by the Office of Naval Research and other funding agencies in the U.S. A further evolution has produced CREAMS-III as the PICES Science Board endorsed the CREAMS/PICES Program at PICES XIII, which covers all disciplines of ocean sciences, including biological and fisheries oceanography.

Kuh is currently a professor at the School of Earth and Environmental Sciences (SEES), Seoul National University and is Director of “Brain Korea 21” for 1999–2006, funded by the Korean Ministry of Education and Human Resources to build a world-class school in Korea. He has been with PICES as member of the Physical Oceanography and Climate (POC) Committee since 1996, and served as Chairman of POC from 2002-2005. Kuh is also on the International Steering Team for the Argo project, which is deploying a global array of profiling floats to monitor the state of the ocean.