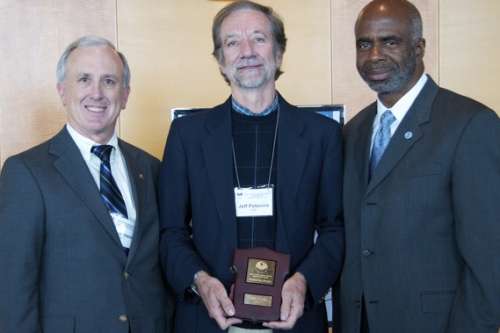 At the 2010 PICES Annual Meeting in Portland, OR, U.S.A., it was announced that Dr. Jeffrey Polovina (NOAA, Pacific Islands Fisheries Science, U.S.A.) was the recipient of the 10th annual Wooster Award.

It gives me great pleasure to announce that the Wooster Award for 2010 is being given to Dr. Jeffrey J. Polovina, world-renowned oceanographer with NOAA’s Pacific Islands Fisheries Science Center. Dr. Polovina’s groundbreaking contributions to climate and marine ecosystem research epitomize the PICES approach of integrating oceanographic factors and biological modeling to significantly advance ecosystem management.

During an exemplary career that spans 30 years, one would never guess that Dr. Polovina did not start out in fisheries. Regardless, his insights as a trained mathematician and statistician may have formed the basis of a landmark scientific achievement in the 1980s—the development of an innovative marine ecosystem model, ECOPATH, to describe energy flow through a coral reef food web. ECOPATH was the first model to apply a type of statistics called “path analysis” to the field of marine ecology, and Dr. Polovina’s role in its development was recognized as one of NOAA’s Top Ten scientific breakthroughs in the agency’s first 200 years. The model’s elegant simplicity and ability to accurately identify ecological relationships has since revolutionized scientists’ ability to understand complex marine ecosystems around the world.

Much like the ocean itself, the scope of Dr. Polovina’s innovative scientific research is wide and deep. With over 115 publications to his name, Dr. Polovina has demonstrated incredible breadth in his theoretical, analytical, and direct approaches to tackle some of the most challenging questions about marine ecosystems and the species that inhabit them. For over a decade, he and his team have made extensive use of satellite remotely-sensed oceanographic data to better understand ecosystem dynamics in the central North Pacific. By combining remotely-sensed data with electronic tracking data from large pelagic animals, Dr. Polovina provided remarkable new insights into the migration and forage habitats of loggerhead sea turtles, bigeye tuna, whale sharks, and whales. His research interests also include the applications of remote sensing and ocean circulation models to fisheries issues and, particularly, protected species of the Hawaiian Islands. Moreover, his distinguished career is anchored by early studies on the impact of climate change on marine fisheries as well as more recent discoveries of how global warming may be contributing to the world’s expanding biological ocean deserts.

Dr. Polovina has worn many hats in his service to the PICES community. His significant roles have included: co-convening a major session on Pacific climate variability for the 2000 PICES “Beyond El-Niño” Conference, co-guest-editing a PICES special issue on the marine ecosystem impacts of climate variability in 2001, and helping organize the 2002 PICES symposium on “Transitional Areas in the North Pacific”. More recently, he served as a member of the Study Group on Fisheries and Ecosystem Responses to Recent Regime Shifts and was honored to deliver the keynote lecture at PICES-2004 on the applications of electronic tags as oceanographic sensors.

Dr. Polovina’s contributions to the international scientific community and award recognition may have thrust him into the limelight, but behind the scenes he is equally engaged in mentoring and training the next generation of scientists. He has served as a strong advocate of his staff scientists’ participation in PICES activities, as evident in the contributions of Drs. Michael Seki, Reka Domokos, Evan Howell and Donald Kobayashi at past PICES meetings and, hopefully, for years to come.

Please join me in congratulating Dr. Jeffrey Polovina as the recipient of the 2010 Wooster Award.

Thank you, Drs. Wada and Stein. What a surprising and amazing honor! I am especially humbled given the outstanding scientific talent in the PICES community and that represented by the previous awardees. This award is especially significant to me for several reasons. In the late 1980s, we observed ecosystem changes in the Hawaiian Archipelago and invited Dr. Wooster to Hawaii to help us develop a research program to understand those changes. Thus, Dr. Wooster's guidance helped shape the direction of much of my subsequent research on decadal variation. Secondly, while much of my research focuses on the subtropical ecosystem south of the PICES geographic area of interest, the PICES community represents my intellectual home. Its approach of addressing large spatial-scale dynamics, physical-biological linkages, and complete ecosystems has always had great appeal to me. Lastly, I would like to acknowledge that my achievements are the result of contributions from many wonderful colleagues, mentors, and co-authors, and I am truly grateful to the collaborations over many years with the talented staff of the Ecosystems and Oceanography Division of the Pacific Islands Fisheries Science Center.