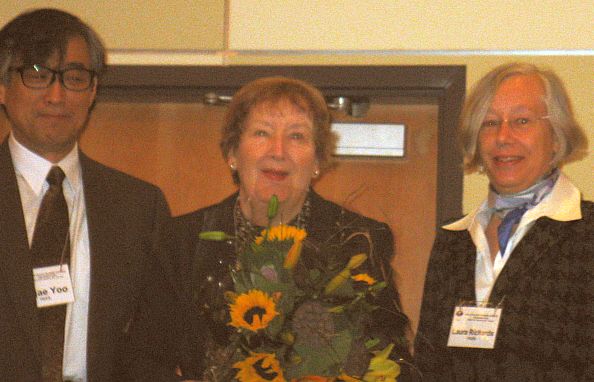 At the 2013 PICES Annual Meeting in Nanaimo, BC, Canada, it was announced that Prof. Vera Alexander (University of Alaska, Fairbanks (UAF)) was the recipient of the 13th annual Wooster Award.

The presentation ceremony took place on October 14, 2013, during the PICES-2013 Opening Session. It was conducted by Drs. Laura Richards (PICES Chairman) and Sinjae Yoo (PICES Science Board Chairman). Dr. Yoo introduced the award and read the following Science Board citation.

The Wooster Award is the highest recognition of individual scientific achievement offered by PICES. Its name honors the first Chairman of PICES, Prof. Warren S. Wooster. The award is given to an individual who has made significant contributions to North Pacific marine science, especially to understanding and predicting how humans and climate affect marine ecosystems. In making its decision, the PICES Science Board looks for sustained excellence in research, teaching, and administration of marine science. It is my great pleasure to announce that Prof. Vera Alexander of the University of Alaska, Fairbanks (UAF) is the recipient of the 2013 Wooster Award for a career of sustained excellence in marine science that has spanned nearly 50 years.

Vera was born in Budapest, Hungary, but left with her family to England just before the start of World War II. There she developed a love for music and became an accomplished pianist. Early in life, she also developed an interest in agriculture and a love for the outdoors. Her family moved to the U.S. east coast, but Vera kept going west to attend the University of Wisconsin where she earned a bachelor degree in 1955. In 1965, she became the first woman to receive a Ph.D. at the University of Alaska. She became an associate professor at the new Institute of Marine Science on the Fairbanks campus.

Vera was a scientific pioneer. She was among the first to use the N-15 isotope to study nitrogen fixation in lakes. At the time, everyone thought that bacteria were the primary source of fixed nitrogen, but Vera found that most of it was fixed in lakes by blue green algae. Since this groundbreaking effort, this same process has been found in other environments including tundra terrestrial ecosystems, where lichens fix nitrogen.

Vera is also known worldwide for her pioneering research on the role of sea ice in the Bering Sea, by discovering that the ice was a critical factor determining spring productivity in the arctic region. The importance of Vera’s work on Arctic phytoplankton and sea ice algae cannot be overstated. Many of her studies, such as heterotrophy of sea ice algae, or developing appropriate techniques to measure ice algal activity, were firsts in marine science. She and her colleagues, helped to lay a foundation for the current US Bering Sea Ecosystem Program that is further developing our understanding of biological processes in polar seas. Vera has published more than 70 papers in the refereed literature, most of which are recognized for scientific excellence with many having more than 50 citations.

Vera is known internationally and deeply appreciated for her administration of many regional, national, and international marine science programs. In 1980, she became the director of the Institute of Marine Science where she was instrumental in bringing fisheries scientists and oceanographers together. When the School of Fisheries and Ocean Sciences was formed at the University of Alaska in 1987, Vera became its first dean and served in that role for nearly 20 years.

A crowning achievement in Vera’s career was the construction and launch of the 261-foot research vessel (R/V) Sikuliaq, one of the most advanced research vessels in the world. The Sikuliaq, owned by the US National Science Foundation and operated by the University of Alaska Fairbanks, is the first ice-strengthened research vessel in the U.S. academic fleet. She and Bob Elsner were involved with the planning and development of this ship for several decades. Vera’s vision and involvement was recognized when she was invited to christen the ship at its launching in 2012. Vera and Bob’s initials have been welded into a steel plate that is affixed to its keel.

In the course of her illustrious career, Vera Alexander has received numerous honors, including election as Fellow of the American Association for the Advancement of Science, to the Arctic Institute of North America, the Explorers Club, and was given the Walter and Ermalee Hickel Lifetime Achievement Award from the Alaska Marine Leadership Council. Vera was honored recently by the naming of the Vera Alexander Learning Center, which is the most technologically advanced classroom on the UAF campus.

Her service to science spans many organizations, including, 16 years as a commissioner on the United States Marine Mammal Commission, 10 years on the Science Panel of the North Pacific Research Board, and 12 years on the International Scientific Steering Committee (SSC) of the Census of Marine Life (COML). She also received an honorary Doctorate of Laws degree from Hokkaido University in recognition of her work in promoting international scientific cooperation.

Vera is a founder of PICES where she served as U.S. Delegate from 1992-2002, before becoming Vice-Chairman from 1998-2002, and Chairman from 2002-2006. Her dedication and contributions to PICES are deeply appreciated by all of us.

Ladies and Gentlemen, please join me in congratulating Dr. Vera Alexander as the 2013 recipient of the Wooster Award.

I was completely surprised and astonished to receive this prize and yet nothing could have pleased me more. PICES has been an incredibly important part of my life, and in developing the Organization under the wise leadership of Warren Wooster, I learned so much. Preparing for PICES seemed to take a long time, but once it was signed, the forward movement was amazing. Others, too numerous to mention, played important roles as well, but I particularly want to mention Dick Beamish and Bill Aron for introducing me to the world of fisheries science and international policy most effectively. I owe them and PICES a major debt. It would be negligent not to mention Alex Bychkov and his excellent staff; they are highly effective and a pleasure to work with. It is good to find that PICES is prospering and continuing to do good and timely work. I am humbled in receiving the Wooster Award, but also extremely grateful and happy for this recognition. Thank you very much.