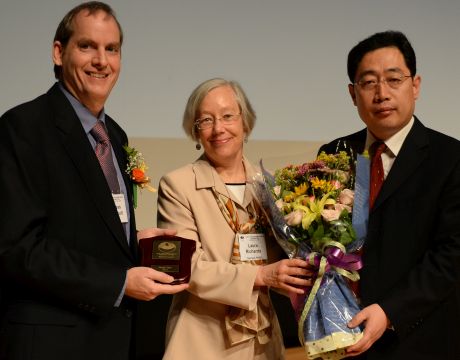 At the 2014 PICES Annual Meeting in Yeosu, it was announced that Prof. Fangli Qiao (First Institute of Oceanography State Oceanic Administration, Qingdao) was the recipient of the 14th annual Wooster Award

The presentation ceremony took place on October 20, 2014, during the PICES-2014 Opening Session. It was conducted by Drs. Laura Richards (PICES Chairman) and Thomas Therriault (PICES Science Board Chairman). Dr. Therriault introduced the award and read the following Science Board citation.

In 2000, PICES Governing Council approved the establishment of an award named in honour of Professor Warren S. Wooster, a principal founder and the first Chairman of PICES, and a world-renowned researcher and statesman in the area of climate variability and fisheries production. The award is given annually to an individual who has made significant scientific contributions to North Pacific marine science, such as understanding and predicting the role of human and climate interactions on marine ecosystems.

It is my great pleasure to announce that the recipient of the 2014 Wooster Award is Dr. Fangli QIAO of the First Institute of Oceanography (FIO), State Oceanic Administration, People’s Republic of China, for a career of sustained excellence in marine science research that has spanned more than 20 years.

Fangli was born in a small Chinese village in 1966 and entered the Ocean University of China in 1984 with the highest score. In 1988, he was recommended as a Master’s candidate and received his PhD in 2003. Dr. Qiao was promoted to his full professor position within six years after starting at FIO due to his excellence in ocean research. He has more than 200 publications in peer-reviewed journals, two published books, and serves on the editorial boards of 3 international journals.

His most cited publication clarified the crucial importance of surface waves in large-scale circulation through vertical mixing, which is now used as the theoretical basis for ocean model improvement. This theory has been confirmed by laboratory experiments and field observations. Numerical experiments show that this mixing scheme is much more important than traditional shear-induced mixing. Previous ocean circulation models produced insufficient vertical mixing, under-predicting surface mixed layer depth and over-predicting sea surface temperature. These improvements are important for modeling the climate system, and he shared this with IOC/WESTPAC member states through the development of an operational wave-tide-circulation coupled Ocean Forecasting System, which will benefit coastal populations in Southeast Asia. The operational system was launched in May 2012.

Fangli provided important scientific support for several public health issues, including identifying the causes of algal blooms and accumulations in the Qingdao coastal area of the Yellow Sea in 2008, and the spread of radiation from the damaged Fukushima nuclear plant in March 2011. In addition to his scientific achievements, Fangli has made substantial contributions to administration of science and professional service. As Deputy Director General and more recently Director General he has been in charge of international cooperation for FIO for nearly 10 years.

Dr. Qiao assisted in the founding of the UNESCO/IOC Regional Training and Research Center on Ocean Dynamics and Climate (UNESCO/IOC-ODC) and has served as director since its establishment in June 2011. To date, 169 trainees from 26 countries have participated in ODC training courses.

He has been active in PICES as a member of Science Board from 2005-2012 and currently serves as a member of POC, WG-29, and Governing Council. He has encouraged a number of early career scientists from China to become engaged in PICES

Ladies and Gentlemen, please join me in congratulating Dr. Fangli Qiao as the 2014 recipient of the Wooster Award.

Thank you! What a surprising and amazing honor! There are so many outstanding scientists in PICES community, I am humbled in receiving the Wooster Award, but also very happy for this recognition. PICES is a big family; I have learned a lot from this family during the past ten years. As you know, improving simulation and forecasting of the ocean and climate has been one of PICES' top priorities, however, all ocean circulation and climate models face common problems, that is, a lack of vertical mixing in the upper ocean. Where is the missing energy? At last, we have found that surface waves play a dominant role in the upper ocean, which is not only important for improving ocean and climate models, but is also relevant for the marine ecosystem. I would like to acknowledge that the above achievements are the result of contributions from many wonderful colleagues and mentors; I am truly grateful to the collaborations. Ladies and gentleman, I would like to share the Wooster Award with all of you. It could not happen without your full support. Thank you again, and I hope to meet all of you in Qingdao in 2015.