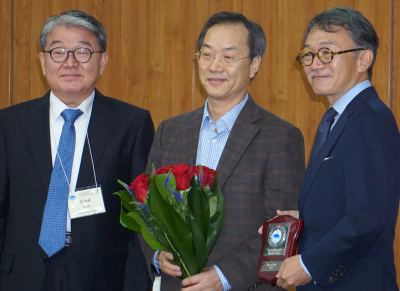 At the 2017 PICES Annual Meeting in Vladivostok, Russia, it was announced that Dr. Suam Kim (Pukyong University, Korea) was the recipient of the 17th annual Wooster Award.

The presentation ceremony took place on September 25, 2017, during the Opening Session at PICES-2017 and was conducted by Drs. Chul Park (PICES Chair) and Hiroaki Saito (PICES Science Board Chair). Dr. Saito introduced the award and read the following citation.

In 2000, PICES Governing Council approved the establishment of an award named in honour of Professor Warren S. Wooster, a principal founder and the first Chairman of PICES, and a world-renowned researcher and statesman in the area of climate variability and fisheries production. The criteria for selection are: sustained excellence in research, teaching, administration or a combination of the three in the area of North Pacific marine science. Special consideration is given to individuals who have worked in integrating the disciplines of marine science, and preference is given to individuals who were or are currently actively involved in PICES activities. Please join me in congratulating the recipient of the 2017 Wooster Award, Dr. Suam Kim. Slide show with accompanying citation.

Dr. Suam Kim is a professor of the College of Fisheries Science under the Department of Marine Biology at Pukyong National University in Busan, Korea. His career in examining fishery resources worldwide has spanned more than 35 years, including his chairmanship of international organizations related to science programs on fisheries and ocean studies such as PICES and NPAFC. He has published over 100 peer-reviewed articles on topics of climate change, fishery resource trends, ecosystem changes and forecasting of fish stocks. He has published 6 books in Korean, and contributed chapters to 28 books domestically and globally.

Dr. Suam Kim was born in Seoul, Korea. He has one elder brother and one younger sister. From early on, he had a great love for nature, and especially the mountains and the sea. Mountains, climbing and skiing were his passions. As a child he dreamed of climbing Mt. Everest. Suam seems to be a risk taker. [karaoki photo] Karaoke—now that is a real risk taker.

He met a girl, her name was Youngyeon, they married, and soon two became three when his daughter Dahjong was born.

Suam’s connection to the sea deepened when he entered the department of oceanography of Seoul National University in 1972. His education continued with a Masters in Marine Biology in Korea, and a PhD in Fisheries Oceanography at the University of Washington. He did a postdoc at the Alaska Fisheries Science Center of NOAA. In 1989, as a young scientist still, he shifted his focus to studying the Antarctic. In 1992 he was team leader of the Antarctic King Sejong Station, where he managed research operations and studied Antarctic biological resources. He later published “The Antarctic Science Story” in Korean for his daughter based on his experiences from this time. Climbing again.

Some of his more highly cited papers published in English are shown here. Dr. Kim has also played an active role in many international organizations in the areas of marine fisheries and oceanography, including for PICES as shown in the first three items here, for the NPAFC, where he is currently Vice-President and a decade ago was chairman, and CCAMLR, where he was vice chairman of the scientific committee. [This and the next slide show photos of Dr. Kim at several PICES events.] Enjoy them, he seemed to. Suam was the local symposium convener of the 2nd Effects of Climate Change on the World’s Oceans International Symposium, where he welcomed the participants to the venue, and probably worried about the logistics of the meeting.

After Suam moved to Pukyong National University in 2000 he has devoted great energy to fostering the next generation of marine and fisheries scientists. As a member of the Korean Committee of GLOBEC, he convinced an anonymous benefactor to provide funds that would enable young Korean scientists to attend and present their studies in international venues. This support enabled more than 50 young scientists to share their science results in various venues including PICES. Many of his students received Best Presentation Awards at 4 PICES Annual Meetings. Some of Suam’s students are shown here. Suam shared his love of science, and his fondness for mountains with his students. Please join me once again in congratulating Dr. Suam Kim as the recipient of the PICES 2017 Warren S. Wooster Award.

I am so much honored to be a Wooster Award recipient. Since my first participation in PICES in 1993, I learned much from PICES friends on science. Actually, my science and career has been growing up within PICES. I owe much to PICES. Through conversations and communication within the PICES society, my team of students has carried out research efficiently. For me, PICES was, and is, my scientific playground. I have always been comfortable whenever I attended PICES meetings. Therefore, I wish everybody here, especially young scientists, to enjoy this PICES meeting, as I have done before.

Still, my homework from Warren Wooster, who was my PhD committee member, is not completed. Because I worked on pollock and krill in the subarctic and Antarctic oceans, he suggested I write a paper covering both hemispheres. Someday I wish to write it!

Again, I appreciate all friends within PICES society.