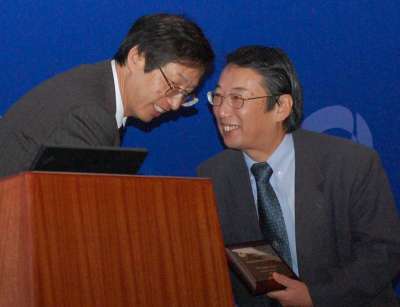 At the 2008 PICES Annual Meeting in Dalian, China, Dr. Stein introduced POMA and announced that the very 1st award was unanimously voted to be given to the training ship T/S Oshoro-maru of Hokkaido University, Japan.

Dr. Wada presented a commemorative plaque and a certificate to the representative of the recipient, Dr. Akihiko Hara (Dean, Graduate School of Fisheries Sciences, Hokkaido University).

The observations made aboard T/S Oshoro-maru have contributed to the rapid progress of marine science in the region. The annual summer cruises since 1955 have allowed long-term ecosystem observations, and have advanced cooperative research among PICES countries. The data collected during T/S Oshoro-maru cruises are invaluable for addressing current scientific problems of the North Pacific. More than 250 scientific papers have been published using these data. For a brief history of the ship, refer to the PICES Press article by John Bower published in 2001 (Vol. 9, No. 1).

Science Board citation for the 2008 POMA Award

Significant advances in marine science are often based on ocean observations. Long-term observations are particularly important for detecting and understanding ecosystem change because major shifts in ecosystem structure and function occur over long temporal periods. It is widely recognized that these fundamental activities often lack the glamour and respect that typically accompanies other types of scientific achievement even though these other achievements rely on monitoring and observation. It is unfortunate that monitoring activities are often taken for granted and are frequently targeted for budget cuts when countries experience financial constraints or hardships.

With this in mind, PICES recently established a new award to recognize the sustained accomplishments of those engaged in monitoring data management, and communication. The PICES Ocean Monitoring Service Award (POMA) was established to recognize organizations, groups and outstanding individuals that have contributed significantly to the advancement of marine science in the North Pacific through long-term ocean monitoring and data management and communication.

In January of this year, PICES announced the award and solicited nominations for the very first POMA. The nominations were considered in April and the Science Board was unanimous in their decision. It is my pleasure to announce that the training ship T/S Oshoro-maru of Hokkaido University is the first recipient of the PICES Ocean Monitoring Service Award.

The first Oshoro-maru was built in 1909. The 31-meter wooden topsail schooner equipped with a 63 horsepower engine was modeled after those vessels used in the Gloucester cod fishery. It was named for a bay on Hokkaido, Japan. The bay, then an important fishing ground for Pacific herring, was the ship’s first home port. In 1927, Oshoro-maru I was replaced by Oshoro-maru II, a 42-m steel barkentine with a 500 horsepower diesel engine. In 1955, the faculty of Hokkaido University greatly expanded their mission both geographically and thematically, adding meteorological observation, seawater analysis, plankton and larval fish collections, dredging and sea surface temperature measurement. In 1955, the ship made her first foreign port call during a North Pacific cruise to Seattle. This was the first visit by a Japanese government ship to the U.S. since the end of the World War II. One of the prominent scientific accomplishments of Oshoro-maru II was Professor Naoichi Inoue’s “marine snow” research in 1952 conducted from the submersible “Kuroshio” for which Oshoro maru II served as the mother ship.

In 1962, Oshoro-maru III, a 67-m stern trawler with 2000 horsepower engine, was launched. She continued the important contributions made by the faculty of Hokkaido University by increasing monitoring activities in the North Pacific and the Bering Sea. This led to an increase in the degree of international collaboration. Since 1962, more than 100 scientists from outside of Japan have participated on her cruises.

Oshoro-maru IV, the current vessel, began her tenure in 1984. She is a 73-m stern trawler equipped with 3,200 horse power engine. She has 13 officers and 27 crew and the capacity for 6 researchers and 60 students. Oshoro-maru II, III and IV have made more than 90 port calls to nearly 20 ports on her North Pacific cruises, while primarily conducting research in the Bering Sea and North Pacific Ocean. The sampling includes physical, chemical and biological oceanography as well as fisheries. The data from the North Pacific cruises have been published annually since 1957 in the Faculty of Fisheries “Data Record of Oceanographic Observations and Exploratory Fishing” and are now available on a CD published by the Japan Oceanographic Data Center. Data from experimental fishing and other associated biological sampling are being organized in a new database that will soon be publicly available. This will contribute to our ability to understand the response of North Pacific marine ecosystems to climate change.

The observations made aboard Oshoro-maru have contributed to the rapid progress of marine scientific research in the region. The annual summer cruises since 1955 have allowed long-term ecosystem observations, and have advanced cooperative research among PICES countries. Through the T/S Oshoro maru, members of the Faculty of Fisheries, Hokkaido University have actively promoted cooperative investigations among universities and research institutes of PICES countries, such as the University of Alaska, University of Washington, University of Hawaii, Oregon State University, University of British Columbia, NOAA – Alaska Fisheries Science Center, and Institute of Ocean Sciences of Fisheries and Oceans Canada, as examples. More than 250 scientific papers have been published using the data collected during Oshoro-maru cruises.

The almost 50 years of hydrographic, nutrient, zooplankton, and chlorophyll data of Hokkaido University are invaluable for addressing current scientific problems of the North Pacific Ocean. The Faculty of Fisheries showed great foresight in establishing their vessel as one of the principle sampling tools of the North Pacific Ocean. They have generously shared their ship time and observations with the international community and today we recognize and reward their accomplishments.