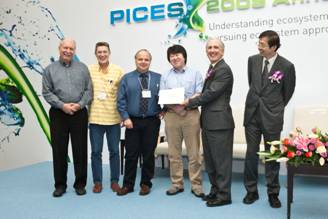 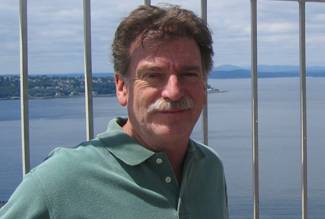 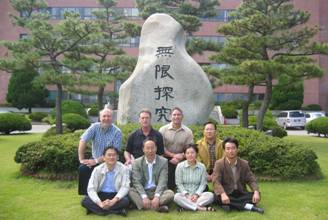 Members of the Korean and U.S. MFP teams in Busan, Korea. 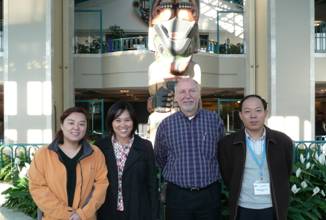 Members of the Chinese and U.S. MFP teams at PICES-2007 in Victoria, Canada.

At the 2009 PICES Annual Meeting in Jeju, Korea, during the POMA presentation ceremony, Dr. Wada introduced the award, and Dr. Stein announced that the 2nd POMA Award be given to Dr. Bernard Megrey of NOAA-Fisheries’ Alaska Fisheries Science Center and Mr. S. Allen Macklin of NOAA’s Pacific Marine Environmental Laboratory, for their sustained efforts, vision, and leadership in building an inventory of biophysical data for the North Pacific, and for creating the PICES Marine Metadata Federation.

The full citation presented by Dr. Stein is included in the 2009 PICES Annual Report. In this citation and the remarks of appreciation given by Dr. Megrey, who accepted the award, it was highlighted that the Metadata Federation Project (MFP) was not accomplished by just two people. Rather, it is the product of the collective effort of many experts representing national contributions from all PICES member countries, coordinated and solidly supported by the PICES Technical Committee on Data Exchange.

Science Board citation for the 2009 POMA Award

Researchers studying marine ecosystems need access to information on multiple ecosystem processes spanning everything from the seabed to the atmosphere. Metadata, or data describing what, when and how data were collected, help researchers choose information relevant to their project without acquiring the actual data. Metadata make data “discoverable”. Even if data collectors provide metadata, there is no centralized repository of metadata contributed from different sources.

For the past 5 years, Dr. Bernard A. Megrey of NOAA-Fisheries’ Alaska Fisheries Science Center and Mr. S. Allen Macklin of NOAA’s Pacific Marine Environmental Laboratory led an initiative within PICES to federate marine metadata collections from all member countries into one integrated resource, the PICES Marine Metadata Federation. With this tool, a user has the ability to search for data catalogued by any and all participating countries with a single search request. Using modern data management standards and techniques to cross-search separate metadatabases has the advantages of shared metadata without compromising national ownership, data integrity, or the security of national metadata products. This task was accomplished by interacting with a large collaborative team consisting of data users and experts within PICES, practicing scientists trying to solve multi-national problems within the Pacific Rim, data providers and computer IT staff at international laboratories in Japan, China, Russia, Korea and Canada. Over the course of the project, separate meetings were held with each international team in the United States, and then the U.S. team visited the cooperating laboratory to meet their staff and leadership.

Bernard and Allen actively wrote proposals to secure funding, coordinated the expansion of the Federation by locating new partners, visited international laboratories, contacted participants, promoted the Federation within the PICES community, served as a point of contact, and supplied technical support on issues related to establishing a federated metadata node. They also provided capacity building within PICES by organizing training workshops and metadata training.

All nodes of the PICES Marine Metadata Federation offer English metadata records in a standard format through a standard communication protocol. Access to the portal is through a metadata clearinghouse that supplies search and delivery functions to the user who does not have to worry about which country or institution collected the data. In the process of developing the project, a PICES Technical Report was written providing instructions to each country regarding how to establish a node. Numerous PICES Press articles and over 15 oral presentations were given at PICES scientific meetings, Standing Committee and Working Group meetings. This was NOT an easy job. Although many people and agencies had long recognized the ‘need’, there were no good models of exactly how to satisfy this need. Bern and Allen led the team which showed PICES how to do this and then made it happen! The success of the project required support from members of the PICES Technical Committee on Data Exchange (TCODE), Kimberly Bahl, and close international collaborations with Kyu-Kui Jung and Hae-Seok Kang (Korean Oceanographic Data Center), Toru Suzuki (Marine Information Research Center, Japan Hydrographic Association), Ruguang Yin and Jixiang Chen (National Marine Data and Information Service, State Oceanic Administration of the People’s Republic of China), Igor Shevchenko, Olga Vasik and Igor Burago (TINRO-Centre, Russia) and Robin Brown and John Holmes (Fisheries and Oceans Canada). Throughout the long development and implementation period, Bern and Allen provided important leadership and vision, in addition to acquiring the resources to complete the job.

I am very pleased to announce that the PICES Ocean Monitoring Service Award for 2009 is given to Dr. Bernard A. Megrey and Mr. S. Allen Macklin for their sustained efforts, vision, and leadership in building an inventory of biophysical data for the North Pacific and creating the PICES Marine Metadata Federation.

I want to thank PICES and the TCODE and MONITOR committees for selecting the PICES Metadata Federation Project for this year’s PICES Ocean Monitoring Service Award. My colleague, Allen Macklin, could not be here today as he recently retired and is living the good life. I know he would want me to extend his thanks for this very special recognition.

The PICES Metadata Federation Project was not accomplished by two people. Rather, it is the product of the collective effort of many individuals representing national contributions coordinated and solidly supported by TCODE and PICES. The names and pictures of the individuals making up each national team are being displayed for you right now. It is gratifying to see emphasis given to data management activities within PICES. PICES scientists strive to answer difficult questions, especially as we begin a new science program. I am confident that the metadata tools provided by the project will help move the FUTURE scientific program forward in significant ways. This is your resource. Please use it and contribute to it.

Now I would like to invite my collaborators to join me on the stage if they are in the audience. I believe I see Robin Brown from Canada, Igor Shevchenko from Russia, Toru Suzuki from Japan, Ruguang Yin from China, and Kyu-Kui Jung from Korea. Please join me in accepting this award on behalf of the PICES Metadata Federation Project. Certificates were also given to representatives of all national teams that participated in the Metadata Federation

I am sorry that I was unable to be with you to accept this award personally. Through the voice of my colleague, Bern Megrey, I expressed my thanks and appreciation to the Science Board and the TCODE and MONITOR committees of PICES for recognizing the value of this contribution to marine science.

Information management is a basic and unstated underpinning of the Scientific Method. As scientists we pose questions about the world, seek background knowledge, develop ideas about how things work, test those ideas through observation, analyze data from such tests, validate our ideas, and communicate the results. Clearly, the more information available at any step of the process should increase the overall advance of science. In this modern era, it is imperative that the information be well managed, valid and discoverable.

This project began with the intent to reveal more information about the Bering Sea. With the support of PICES and cooperation of its member countries, the PICES Metadata Federation Project now addresses a much wider geographic area, serves a greater user community and is a tool for international cooperation in guiding our understanding and use of marine areas. I urge you to use and contribute to this tool to continue its development and increase its value.

Finally, I wish for you know how rewarding and exciting working with PICES was to my career. It truly brought a new scope and understanding of the international world of science and our responsibility to guard our planet. To my many friends, Kom Bei!