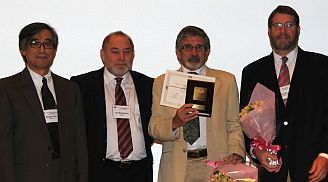 At the 2012 PICES Annual Meeting in Hiroshima, Japan, it was announced that the California Cooperative Fisheries Investigations (CalCOFI) was the recipient of the 5th POMA Award.

The presentation ceremony took place on October 15, 2012, during the PICES-2012 Opening Session. It was conducted by Drs. Lev Bocharov (PICES Chairman) and Sinjae Yoo (PICES Science Board Chairman). A commemorative plaque and a certificate were presented to Drs. Antony Koslow and Steven Bograd, who received the award on behalf of the hundreds of people, past and present, who have contributed to the CalCOFI for the past seven decades.

Science Board citation for the 2012 POMA Award

Long-term monitoring observations are particularly critical to detecting and understanding ecosystem changes. The PICES Ocean Monitoring Service Award (POMA) was established to acknowledge monitoring and data management activities that contribute to the progress of marine science in the North Pacific. It is my great pleasure to announce that the 2012 POMA goes to the California Cooperative Fisheries Investigations (CalCOFI).

CalCOFI can trace its origins to the pioneering work on fisheries oceanography by Harald Sverdrup and Oscar Sette in the 1930s. By the time the sardine fishery was rapidly declining in the late 1940s, it was well recognized that the population dynamics of pelagic fish could not be understood without considering the effects of their environment. When the sardine industry voluntarily imposed a tax on its landings in order to answer the immediate questions of where had the fish gone and when were they coming back, it also recognized that meaningful answers would depend on a broad set of ecological observations. Thus, CalCOFI was born as a unique partnership between the fishing industry, resource management agencies and academic institutions.

A grid of CalCOFI stations that encompasses the length and breadth of the California Current was established. The geographic extent and temporal density of observations has waxed and waned over the decades depending on resources, but the commitment to CalCOFI by participating institutions, particularly the US Government, has never wavered since 1949. CalCOFI researchers have described the bio-geographic patterns of a broad range of zooplankton and ichthyoplankton taxa, explored the effects of coastal upwelling and advection on biological productivity, described the coupling between the environment and survival of young fish, and advanced the field of fishery oceanography.

Over time, the length of CalCOFI data sets has allowed the resolution of ecological variability over a range of scales from seasonal to decadal to long-term secular change. CalCOFI has also evolved with the addition of new instrumentation and sampling protocols. Hundreds of student theses and thousands of scientific articles have used CalCOFI data sets and have built on the scientific foundation set by CalCOFI.

Over the years, other marine observation programs sponsored by the National Science Foundation, the Office of Naval Research, the Integrated Ocean Observation System, and private foundations have built on, and leveraged, the strength of the CalCOFI program. This has improved our ability to document processes in the California Current and has established the region as a model for assessing the health of marine ecosystems.

The CalCOFI Committee guides the fieldwork and publications of the program and is currently composed of representatives from Scripps Institution of Oceanography, Southwest Fisheries Science Center and California Department of Fish and Game. Please join me in congratulating Drs. Antony Koslow and Steven Bograd, receiving the award on behalf of the hundreds of people, past and present, who have contributed to the CalCOFI for the past seven decades.

I am both proud and humble to accept the PICES Ocean Monitoring Service Award on behalf of Scripps Institution of Oceanography and NOAA. CalCOFI is a unique partnership of government and academic institutions: NOAA, the California Department of Fish and Game, and Scripps Institution of Oceanography. As such, its mission since its inception in 1949 has been to study and manage the living marine resources of the California Current within an ecosystem context. Key achievements of an earlier generation of CalCOFI scientists included development of the daily egg production to assess the northern anchovy and Pacific sardine fisheries, descriptions of the pelagic communities of the California Current, and the first understanding of the impact of ENSO on that ecosystem. The program continued to evolve through the years, adopting new instruments, and making new measurements as that became possible, while building on the old. Today, it is one of the few truly end-to-end observation programs in the world, carrying out observations from winds to whales on its quarterly cruises. In recent years, CalCOFI data have been instrumental in defining the impacts of decadal-scale Pacific variability and exploring the possible influence of climate change, developing new fishery-independent time series for key species, such as market squid and spiny lobster, and describing and modeling changes in deep-water oxygen concentrations and their impacts on mid-water fish communities.

CalCOFI is now more than 60 years old and is the fruit of several generations of scientists at Scripps Institution of Oceanography and NOAA. We are both humble and grateful to receive the award on behalf of all those, past and present, who built this program. If we see further than those who went before us, it is because (as Isaac Newton once said) we stand on the shoulders of giants.