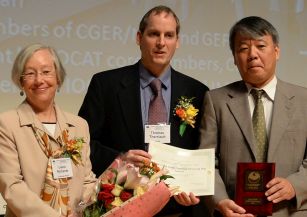 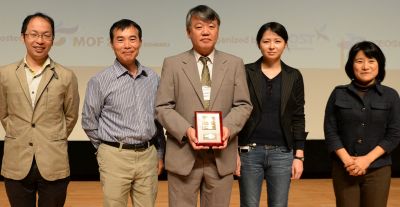 At the 2014 PICES Annual Meeting in Yeosu, Korea, it was announced that Trans-Pacific Volunteer Observing Ship (VOS) Survey Program was the recipient of the 7th POMA Award.

The presentation ceremony took place on October 20, 2014, during the PICES-2014 Opening Session. It was conducted by Drs. Laura Richards (PICES Chairman) and Thomas Therriault (PICES Science Board Chairman). A commemorative plaque and a certificate were presented to Dr. Yukihiro Nojiri, of the National Institute of Environmental Studies (NIES), Japan, who received the award on behalf of the Trans-Pacific Volunteer Observing Ship (VOS) Survey Program.

Science Board citation for the 2014 POMA

The PICES Ocean Monitoring Service Award (POMA) recognizes organizations, groups and outstanding individuals that have contributed significantly to the advancement of marine science in the North Pacific through long-term ocean monitoring and data management. The award also strives to enlighten the public on the importance of those activities as fundamental to marine science. It draws attention to an important aspect of the PICES Convention that is less appreciated: "to promote the collection and exchange of information and data related to marine scientific research in the area concerned".

It is my great pleasure to announce that the recipient of the 2014 POMA award is the National Institute for Environmental Studies (NIES) of Japan for their Trans-Pacific Volunteer-Observing-Ship (VOS) Survey Program.

To understand global carbon budgets requires broad spatial and temporal in situ observation of oceanic CO2 partial pressure (pCO2). The atmosphere–ocean difference of pCO2 controls the flux and efflux of oceanic CO2. While many historical pCO2 observations were obtained from oceanographic research vessels, it was recognized that the need for more complete spatial and temporal coverage could be satisfied partially using volunteer observing ships (VOS). This approach was pioneered in 1985 by the late Dr. C.S. Wong of the Institute of Ocean Sciences in Canada. He installed a gas-chromatographic pCO2 instrument on board a cargo ship sailing between the west coast of Canada and Oceania that allowed repeated observations of pCO2 over the equator until 1988 when the ship route changed. Communication between Dr. Wong and Dr. Yukihiro Nojiri called for a new VOS program, and in 1994 a pCO2 VOS survey was revived using the Skaugran, a lumber and car carrier sailing between the U.S. west coast and Japan. Following negotiations with the Captain, Chief Engineer, and operator and owner, NIES prepared the on-board system and technical staff, usually students.

A second VOS, Alligator Hope, a container carrier operating between Tokyo and Seattle/Vancouver was outfitted. Dr. Nojiri obtained special funding to improve the on-board pCO2 system that was more automated and able to be operated by a one of the ship’s crew. After 16 round trips, Alligator Hope had a route change to Oceania so the NIES project looked for a new candidate ship for the North Pacific. Since car carriers belong to the manufacturers, they appeared to offer longer-term stability for the Program.

The shipping companies, Toyofuji Shipping and Kagoshima Senpaku, having strong connections with Toyota Motors exporting Japanese cars to North America, Asia and Oceania, have been helping the NIES VOS project since 2001. They graciously allowed pCO2 systems to be installed on several ships, including the third VOS for the North Pacific, the Pyxis. Due to the efforts of NIES, Global Environmental Forum Foundation, Kimoto Electric Company, and the shipping companies, the Pyxis made 86 round trips, which must be a record for a single VOS in the world’s pCO2 observations.

Dr. Hitoshi Mukai of NIES secured funding for an Oceania pCO2 line and, with cooperation from Toyofuji Shipping, designed an atmospheric and oceanic pCO2 observation space on the Transfuture 5, which is now in its ninth year.

The three VOS in the North Pacific achieved 148 trans-Pacific round trips from 1995 to 2013. It amounts to about 30 trips around the globe. This project has been encouraged and supported by PICES member countries and contributed to Working Groups 13 and 17, and now the Section on Carbon and Climate. The project has resulted in 17 scientific publications on North Pacific biogeochemistry, 8 on global ocean pCO2 database and analysis, and 18 on atmospheric sciences through the on-board sampling and measurement of atmospheric components. Additional results and details are available on the project’s web page [http://soop.jp].

In 2007, world experts on ocean surface pCO2 determined that an integrated observational Surface Ocean CO2 Atlas, SOCAT, should be compiled. The NIES VOS data set contributed 14% of the total global pCO2 data in SOCAT. The SOCAT database demonstrated the value of VOS surveys in providing better geographic and seasonal pCO2 data, thanks in large part to NIES VOS Program.

Ladies and gentlemen, please join me in congratulating NIES, who is represented here by Dr. Yukihiro Nojiri, as the 2014 recipient of the PICES Ocean Monitoring Service Award.

First, I want to express my gratitude to the late C.S. Wong (Institute of Ocean Sciences, Department of Fisheries and Oceans, Canada). NIES VOS observations were started by his proposal for collaboration. His laboratory people were on-board members in our first VOS, the Skaugran surveys. I visited him in March 2013, before he passed away in June. He was something like my father in oceanography, and he also took care of many Japanese oceanographers.

When we started pCO2 observations in 1995, we were not familiar with data exchange among ocean CO2 scientists. However, now we have the global open data exchange network, SOCAT. We developed this system under many international organizations, and PICES is an important supporter for the North Pacific. The PICES support for ocean CO2 scientists started in the mid-1990s, which was coincident with our VOS observations.

Most essential support was from shipping companies, captains, chief engineers and ship crews of the volunteer ships, and port authorities. The efforts of staff from NIES, GEF, Kimoto Electric Co., MIRC and many collaborators in Japan were inevitable. Finally, I want to acknowledge our partners such as IOS (Canada), NIWA (New Zealand), CSIRO (Australia), NOAA (USA), IOCCP and many other international supporters.