Assessing the Debris-Related Impacts From the Tsunami
Background

The Great East Japan Earthquake, with magnitude 9.1, struck off the Tohoku coast on March 11, 2011, and created a massive tsunami that impacted more than 10,000 square kilometers of coastline, causing loss of human life, property destruction, and environmental damage. The tsunami washed millions of tons of material into the Pacific Ocean and, within a year, marine debris (termed Japanese Tsunami Marine Debris or JTMD) started arriving on the Pacific coast of North America and the Hawaiian Islands. The ecological and biogeographic significance of this event for the eastern North Pacific became evident when, amazingly, numerous living Japanese coastal species of marine flora and fauna were found on two large docks originating from the port of Misawa (Aomori, Japan), and on an ever increasing number of skiffs, as well as smaller and diversified items from Japan.

While large amounts of marine debris are afloat at sea, researchers rarely know where the debris is from, when it entered the ocean, or how long it took to arrive at its destination. The JTMD study provided the first opportunity in the history of marine science to track a multi-year large-scale (more than 7,000 km) transoceanic rafting of marine life initiating from an exact known source and with an exact known sea-entry time.

In 2014, PICES accepted a request from the Government of Japan to undertake a project referred to as ADRIFT ("Assessing the Debris-Related Impacts From the Tsunami") to be funded by the Ministry of the Environment of Japan (MoE). The project lifetime was 3 years, April 15, 2014 to March 31, 2017, and total funding for this period was $3,681,547 CAD.

The project was directed by a Project Science Team (PST) made up of researchers from Canada, Japan, the United States, and co-chaired by three PICES members: Dr. Hideaki Maki (National Institute for Environmental Studies, Japan), Dr. Thomas Therriault (Department of Fisheries and Oceans, Canada) and Ms. Nancy Wallace (NOAA Office of Response and Restoration, USA). The PST Co-Chairs were responsible for the scientific implementation of the project and annual reporting to MoE and PICES Science Board. They were strongly supported by PICES’ first Visiting Scientist, Dr. Cathryn Clarke Murray (now with Fisheries and Oceans Canada). Dr. Alexander Bychkov served as the Project Coordinator and was responsible for the management of the fund and for reporting annually on its disposition to MoE and PICES Governing Council.

Project goal and areas of research

The overall goal of the project was to assess and forecast the potential effects of JTMD, especially those related to non-indigenous species (NIS), on ecosystem structure and function, the coastlines, and communities along the Pacific coast of North America and the Hawaiian Islands, and to suggest research and management actions to mitigate any impacts.

The project brought together researchers from multiple scientific disciplines, and this international team focused on three major themes: 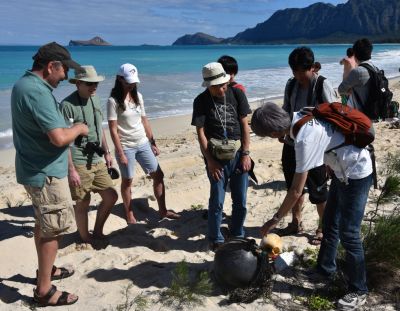 The JTMD species database on the Smithsonian Institution online portal NEMESIS (National Exotic Marine and Estuarine Species Information System) provides comprehensive information on the distribution, biology, ecology, life history traits and invasion history for selected species of marine invertebrates and algae from the northwestern Pacific Ocean, including those associated with JTMD that arrived to the coasts of North America and Hawaii. This information was compiled by applying a standardized search protocol of online resources and scientific literature written in both English and Japanese. The database is an important resource for improving our basic understanding of species transport and attributes related to invasion success, and can contribute to risk assessments.

Over 1,000 individual samples of marine invertebrates from more than 630 registered JTMD objects that landed in North America and Hawaii were placed for long-term stewardship at the Royal British Columbia Museum (RBCM, Victoria, Canada; contact Dr. Henry Choong (Curator, RBCM Invertebrate Zoology)). Approximately 170 pressings of the larger marine algae from 42 registered JTMD objects and 30 smaller plastic debris items thought to also be from the tsunami, as well as 88 pressing of marine algae collected in the Tohoku region of Japan and similar to those found on JTMD, were deposited at the Oregon State University Herbarium (OSC, Corvallis, USA; Contact Dr. Gyle Hansen). These two archival specimen collections allow researchers world-wide to access these unique resources now and in the years to come, especially with the undoubted advance of new analytical techniques. Additional funding for the JTMD marine invertebrate collection was provided by Fisheries and Oceans Canada through a grant from the Priorities and Partnership Fund to PICES.

Recognizing the existence of vast, uninhabited shorelines where JTMD could have made landfall, systematic aerial photographic surveys were conducted to search for, and quantify, JTMD arriving on the coastlines of British Columbia and Hawaii. These surveys were the first comprehensive debris evaluations in these two regions, providing important baselines of marine debris and complementing previous similar efforts in Alaska.

An “Identification guide of seaweeds on Japanese tsunami debris” available on the Kobe University website, and morphological documentation on “Benthic marine algae on Japanese tsunami marine debris” accessible through Oregon State University’s online library (Part 1: The tsunami event, the project overview, and the red algae; Part 2: The brown algae; Part 3: The green algae and cyanobacteria) have been prepared to assist the user in detecting JTMD algal species in the Eastern North Pacific.
Scientific Reports of Funded Research Activities

The impact of Japanese tsunami debris on North America.

Headquarters for Ocean Policy, Government of Japan [Link]
Action of Japan to the drifting matters washed out by the March 11 Earthquake (so-called '3.11 Tsunami Debris')

Media and News
Rafting the Pacific: For the first time, scientists see living organisms carried from one continent to another (by Henry Choong) - Feb 11, 2018, Times Colonist [Link]

How the Japanese tsunami sent marine invaders across the ocean - and why you should be worried. By Emma Johnston and Jim Carlton - January 17, 2016
The Conversation [Link]

Where the world ends up when the ocean spits it out – 28 January 2015. Juneau Empire.com
[Link]

As Japan debris washes up in the US, scientists fear break in natural order – 09 June 2012 [Link]

Hideaki Maki (hidemaki@nies.go.jp) is a Senior Researcher at the National Institute for Environmental Studies (NIES). He had studied microbial degradation of crude oil in marine environments and conducted some field experiments of crude oil bioremediation. Recently, he has been monitoring water and sediment parameters relevant to hypoxia in Tokyo Bay. After the Great East Japan Earthquake, he has been involved in monitoring hydrocarbons contamination of sediments in the Tohoku coastal sea. Hideaki is the Japanese Co-Chair of the project on “Effects of marine debris caused by the Great Tsunami of 2011”, funded by the Ministry of the Environment of Japan, and serves as a member of the PICES Marine Environmental Quality committee and Working Group on Emerging Topics in Marine Pollution.

Thomas Therriault (thomas.therriault@dfo-mpo.gc.ca) is a Research Scientist with Fisheries and Oceans Canada working on a variety of invasive species issues. He is the Canadian Co-Chair of the project on “Effects of marine debris caused by the Great Tsunami of 2011”, funded by the Ministry of the Environment of Japan, and Chairman of PICES Science Board.

Nancy Wallace (nancy.wallace@noaa.gov) is the Director of the National Oceanic and Atmospheric Administration’s Marine Debris Program, which is the federal lead for researching, preventing, and reducing the impacts of marine debris in the United States. She is the US Co-Chair of the project on “Effects of marine debris caused by the Great Tsunami of 2011”, funded by the Ministry of the Environment of Japan, and serves a members of the PICES Working Group on Emerging Topics in Marine Pollution. Nancy has worked on ocean policy related issues for the past decade. Her work includes resource conservation with the National Park Service, developing sustainable catch limits for fisheries off the east coast of the United States and efforts to improve water quality in the Gulf of Mexico.

Alexander Bychkov (ex-officio, bychkov@pices.int) was the Deputy Executive Secretary of PICES from 1996–1999 and the Executive Secretary of the Organization from 1999–2014. He serves now as a Special Projects Coordinator with PICES, and the project on “Effects of marine debris caused by the Great Tsunami of 2011”, funded by the Ministry of the Environment of Japan, is one of his primary responsibilities.

Cathryn Clarke Murray (ex-officio, cmurray@pices.int) is a Visiting Scientist with PICES on the project “Effects of marine debris caused by the Great Tsunami of 2011”, funded by the Ministry of the Environment of Japan. She is also Adjunct Professor in the Institute for Resources, Environment and Sustainability at the University of British Columbia. Cathryn has worked with WWF (World Wildlife Fund) - Canada on the cumulative effect of human activities, with Fisheries and Oceans Canada on ecological risk assessment, and studied the spread of invasive species on marine recreational boats.